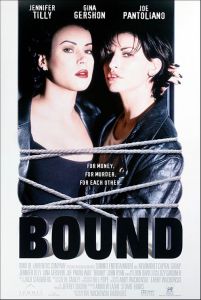 We’s all tied up.

Bound is a competent and stylish thriller rendered timeless by a lesbian subplot between Gina Gershon and Jennifer Tilly. So let’s address the elephant in the room; after some heavy breathing and obvious foreshadowing, there is one sex scene between the two. It is pretty hot, but brief and frankly if it were guy/girl M rated. But it’s girl/girl, so Hollywood in their infinite wisdom saw fit to label this film as R rated – while M rated films continue to show eye-gouging and decapitations galore.

Violet (Tilly) is a red lipsticked and high-heeled diva, she lives in a plush apartment in an otherwise run down building with her mid level mobster husband Caesar (Joe Pantoliano). She catches the eye of Corky (Gershon), the new building handy…person, who wears dirty overalls and a perpetually dismissive expression.

After the two share far more than a glance, they concoct a half arsed plan to take advantage of a one time only opportunity; namely emancipating stolen millions that will be in Caesar’s possession awaiting handover to the violent and unpredictable Johnnie Marzone (Christopher Meloni) the son of the kingpin.

The remainder of the film has all the requisite twists and turns, bad decisions and unlikely developments that such thrillers require, and frankly after Gerson and Tilly have locked lips and hips there is nothing remarkable about Bound, but the lesbian undertone guaranteed notoriety and the competence of the remainder means that the film is at least a curio with (limited) credibility.

The camerawork and visuals show the Wachowski’s as directors with ability and flair, something they have sporadically proven to be the case in the two decades since, but Bound is not much more than a middling thriller with an especially savvy marketing hook.

Final Rating – 6.5 / 10. Just imagine guys if they remade it with Scarlett Johannson and Jennifer Lawrence…