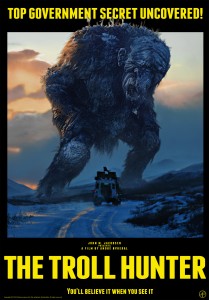 The secret to hunting trolls is enabling proximity. By that I mean allowing yourself time and access to the trolls without scaring them away; or in the case of more aggressive trolls provoking an unwelcome violent response.

The easiest way to do this is to coat oneself in ‘troll goo’, a mixture of fluids and miscellaneous effluvia harvested while tracking along their primary habitats and travel areas. It requires a thorough cleansing of the entire body – especially the genitals – and can be quite unpleasant and offputting for obvious reasons. It is important to also note that this process is not failsafe, as trolls have an acute sense of smell when it comes to Christians, anyone who believes in God emits a pungent and powerful odour that can be picked up even after thorough cleansing and coating.

Now for non-Christians though this process gets you close, close enough to be within plain sight. This leads to the second point: Trolls can’t see, so while it may be petrifying to remain still and exposed as 20 and 30 foot gigantic creatures amble past it is the safest way to guarantee that one is not spotted.

Assuming one is seen though the options available seem pretty close to those available to one spotted by a bear:

1/ stay very still and hope it moves along ignoring you.

2/ be ‘BIG’ and try to convince the troll that you are a threat or simply too much trouble.

4/ expose the troll to bright light where it will either immediately turn to stone (for trolls unable to process the chemicals needed to ward off the exposure to light) or explode (for trolls either too close to the light source or who are especially vulnerable).

Come to think of it perhaps Option 4 is a little different for bears.

There are two distinct types of trolls, mountain trolls and forest trolls, within those two ‘genres’ are several sub-species and variations. Some trolls have too heads, others are much larger than the ‘standard’ 20 feet and others still prefer to reside under bridges (tee-hee indeed). Assuming a troll spots you and escape is impossible the implications are generally bad. A certain amount of scratching and biting is expected for little trolls, mashing and crushing for larger ones, and being eaten is also a distinct possibility. Trolls will in fact eat almost anything, a mix of charcoal and concrete is a special treat but trees, cars and rocks are also on the menu as well as the odd human. Given this knowledge it should come as no surprise that troll flatulence is particularly smelly. So I would like to reiterate my above point that direct contact with trolls is not advisable.

Should one spot a troll might I suggest that they immediately make contact with the Norway Government Troll Wrangler Hans, an expert with decades of experience in the field and a master of trapping stray trolls and most importantly assisting in the subsequent cover-ups to ensure that adverse troll behaviour isn’t made public (bears are a convenient and popular scapegoat).

Hans will also fill in the requisite paperwork and reports including the troll sighting reports and descriptions as required by the department.

The Norway Government Department for Troll Management (and the makers of The Troll Hunter.

Final Rating – 7.5 / 10. I’ve no idea where I originally heard about this one but I’m glad I found it. Your everyday mock-doco about a troll handler hardly screams ‘must watch’, but this is funny, creative and never boring, and most definitely worth a look.