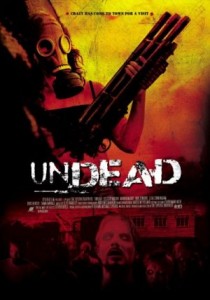 Poster wayyyy better than the film.

Being an Australian who loves film I am apparently obliged to stick up for the local product when I can. Geez they can make that hard for me sometimes…

Undead is apparently a worldwide cult horror hit despite a lack of horror, production values that at best might be labelled ‘rudimentary’ and a plot that oscillates between confusing and aggravating. Actually oscillates might be kind, the longer this film went the more aggravated I became.

Let’s start with the plot. I wish the filmmakers did. Something about meteors turning hapless small town Australians into zombies. They start munching on each other, then flying about, then hovering in space or something. Look it’s all very confusing and I bet if you thought too hard it would still not make any sense.

Regardless of a lack of plot, whatever is in its place really frustrates the reigning beauty queen, the creepy whispering hick and a few others, among whom is a resentful would be aspirant to the beauty queen’s crown (‘Like, she just doesn’t take the responsibility seriously!’). Once amassed they represent the most annoying group of zombie herd escapees that I can remember. It doesn’t help that they are saddled with mostly lame dialogue, but the stilted and at times ridiculously contrived delivery made me hate my own native accent for the best part of two hours.

‘Mungo’ Barry was hailed as a new find by a genre clearly in need of new ideas, when in reality all he did was choose to be the only one not trying verbal histrionics and butchering the English language in new and unexciting ways. Sets him apart, doesn’t make his turn memorable aside from the numerous ways and places that he managed to produce his weapons. I mean where did he keep them all? Ditto the spurs he used for one vital scene that were never seen before or after…

Bravo for making a no budget film that looks enough like a low budget film – I mean really it must be very hard to turn practically nothing into next to nothing – but aside from a couple tee-hee moments it really isn’t that much to go on about.

Final Rating – 5 / 10. Undead is a style looking for some substance.