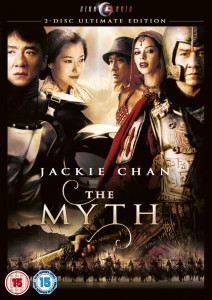 Jackie is actually two Jackies. A General in ancient China charged with the protection of the soon-to-be princess, and his own descendant, an archaeologist named Jack.

Jack’s research leads him on a search for the lost princess from 1,000 years earlier. He is aided by dreams and messages from his ancestor General Moong Yi.

There are a couple of inventive fights early on in the piece, but the constant era criss-crossing, a confusing story and the inclusion of too many characters only highlights the fact that Jackie is slowing down here (he is 50 after all!).

All the wire-work and dodgy CGI can’t hide that, especially in the pointless ending sequence.

One good but brief sword fight. All hand to hand stuff is inventive but obviously wire-assisted.

Nope, anything that would ordinarily be impressive is let down by the obvious wire-work.

Yep, modern day Jack has a deluxe batchin’ pad with an indoor basketball court and personal driving range. (Not bad on an archaeologist’s wage.)

Yes, but tellingly the bloopers are all related to wire-work mishaps and faulty props.

Alas no, not even flashes of the old Jackie.

Nope. He proves he is still agile but is no longer explosive and capable of rockin’ the house.

Final Rating – 5.5 / 10. The Myth is CGI-assisted Jackie Chan lite, and even as a non-action film it is too confusing and the ending is disappointingly bland. (I repeat: Mellika Sherawat is hotttt.)

While I try to throw a joke or two into proceedings when I can all of the opinions presented in my reviews are genuine. I don't expect that all will agree with my thoughts at all times nor would it be any fun if you did, so don't be shy in telling me where you think I went wrong... and hopefully if you think I got it right for once. Don't be shy, half the fun is in the conversation after the movie.
View all posts by OGR →
This entry was posted in Crappy Movies, Film, Jackie Chan, Movie Reviews, Superstars. Bookmark the permalink.