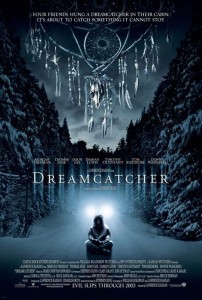 Four friends since childhood – all with super handy mental telepathy – make their annual boy’s trip to a remote cabin, where they will drink, reminisce and toast the one friend from the past who could not be there.

Now try and keep up here: strange people show up. Gassy people. Farty, smelly, disgusting people. Animals go nuts. They run in huge packs. Are they running to something, or from something?

We could only hope to join them in their exodus.

Morgan Freeman and his ‘zero tolerance’ containment crew show up. But what are they containing?

Apparently the ‘whatever’ is very British, with clipped posh sounding accents. It still takes characters altogether too long to realise the guy they have own forever who is suddenly acting extremely different, should be viewed with suspicion. But that happens more than once, and furthermore, everyone leans in toward prone bodies and dark corners where every fibre of their being should be screaming “DONT!”

In a baffling turn of events, the four guys realise that they might actually have connections that hold the key to defeating the whatevers. There is really no reason for me to disclose this, but the reality is there is no reason at all for this to be in the film. It’s so clumsy and amateurish that it’s like they mashed two Steven King short stories together, instead of just adapting one story incredibly badly.

Dreamcatcher is a horrendous combination of awful ideas and poor execution.

Final Rating – 5 / 10. We all know that Steven King adaptations are very much hit and miss affairs – few miss by as much as this.