War of the Worlds (Review) 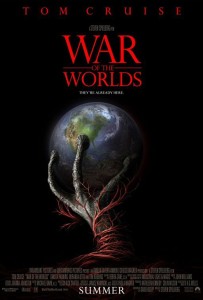 The recent Godzilla film proved how hard it is to generate tension without a worthy foe to collide with. Such is the issue with this War of the Worlds reboot. It’s hard to summon concern or hope when the primary enemy is a purpose built unstoppable robot sent to take over the world. But aside from Tom Cruise there is also the invading aliens forces to distract from those shiny teeth. All those perfect teeth…

Toofey Tom is Ray, a hard working, crane operating, mustang driving, eternally condescending dick; though the film would have you think him a loveable rascal. In my eyes though, Ray is less a man’s man than a dickhead’s dickhead, especially to his two young kids. Kids that his ex-wife is understandably reluctant to leave with him even on his ‘designated dad’ days.

Robbie is a surly teen who Ray opts to parent through baseball and belittling. Rachel is a younger daughter, whip smart, but a girl, and therefore somewhat invisible to Ray.

Somehow Steven Spielberg must make us care that Ray’s life becomes threatened. To me this may be his biggest challenge yet.

It starts with electrical storms which take out the power, phones and even car engines. Without Facebook there is understandably panic in the streets, but it would seem that there are issues even more serious than that!

There is one long cool tracking shot as Team Scientology flee the city – yes Ray is the only guy who works out how to get engines to work – followed by ninety notes of running and whining. Everyone gets a go, the kids, bystanders, and of course, Ray.

I’d actually say more but there isn’t. This ‘War’ is a bit of a fizzer really. Some technical trickery and cgi wizardry masking the fact that there isn’t any material to enhance, and hoping the fading star power of Cruise could fool an audience into showing up.

Final Rating – 6 / 10.  The War of the Worlds managed to pull the wool over society’s eyes once. Not this time…