The Return of the Living Dead (Review) 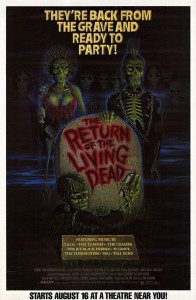 Of course no sooner than this revelation emerges, do we learn that hard evidence exists in the local mortuary. Cold, pale, fleshy hard evidence.

The panicky locals sensibly decide to burn the evidence, sending infected ash into the atmosphere, which any keen amateur meteorologist will tell you, bonds with water beads until it becomes heavy enough to fall as rain (probably not scientifically accurate but whatevs).

This particular tainted rain falls on the cemetery.

The punks that are partying at the cemetery are understandably perturbed by the arrival of the undead from beneath their pointy boots. The high school kids partying their way across town aren’t pleased either. And the officials and mortuary staff who unwittingly have unleashed this brain hungry horde are feeling a mite guilty themselves.

There will be two things to take away from RotLD. The first is that one of the punk chickies spends more time onscreen naked than clothed. The second is the arrival of the first zombie – who is frankly awesome.

Everything after these two things is frankly a derivative disappointment, despite this film being a transparent and sincere love letter to the genre. It’s essentially a bunch of guys covered in mud shuffling awkwardly, pursuing a bunch of kids not covered in mud acting awkwardly, all backed with awful music that someone else probably likes.

In one scene they manage to find a corpse with the ability to give voice to the state of being that is being undead, “it hurts to be dead” hisses the corpse. In the case of Return of the Living Dead at least, it doesn’t do much to watch it, good or bad.