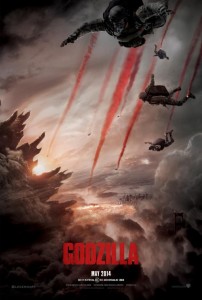 There was a decision to be made with the wife wanting Malificent and me plumping for Godzilla. Would we opt for the film with the globally famous giant scaly creature who makes men tremble and children scream at their very sight all across the land… or Godzilla?

This giant lizard won this time. The fire breathing Ms Pitt will have to wait (ideally until my wife’s second husband).

Unfortunately, like the titular creature himself, the new Godzilla film is huge, slightly cumbersome, occasionally dumb and ultimately unremarkable unless you are talking in terms of dimensions.

The first hour is the equivalent of the rippling water cup scene in Jurassic Park. The signs were there, everyone knows what’s coming; it’s just a matter of how the beastie looks and what he does once he shows up. The tension in the pre T-Rex moments in J Park was electric, but an hour is simply asking a bit too much from an audience expecting little more than a bigger budget version of the climax of the Beastie Boys Intergalactic film clip.

Bring on  Rango‘s dad. Bring us the lizard.

Instead the pre-zilla running time is a tale of two scientists. Joe Brody (Bryan Cranston), a man deeply affected by the stirring of giant creatures in the late 90s (events covered over by the powers that be). Joe is determined not to have the wool pulled over his eyes regardless of how many people tell him to let it go. Elsewhere Dr Serizawa (Ken Watanabe) sees things from the other side of the wool, and boasts a unique perspective on all things gargantuan.

With no real human ‘hero’ it is Joe Brody’s son Ford (Aaron Taylor-Johnson) becomes the ‘right man at the wrong time’. Wherever he seems to go things that cast enormous shadows follow, repeatedly delaying his efforts to return to his own young family across two continents. Taylor-Johnson seems a fine choice if you are desperate for Godzilla to take centre stage, as his largely personality free performance hardly drags the eye his way.

And his perpetually confused expression makes him appear as a Tobey Maguire impersonator wondering where he left his keys.

So with ‘Zilla laying low for a long while and the cast hardly demanding our attention, the ‘money shots’ are largely reaction shots, astonished faces upon the monster’s arrival, the movement of vast machinery and buildings in their wake, and the frenzy of activity either in the aftermath of an encounter, or of those fleeing the areas where contact is imminent.

Clearly better than the 1998 abomination, but aside from a few moments where the sheer size and power of the monsters – yes monsters plural – is well utilised, this is little more than two hours out of the house, not the blockbuster it wants to be.

Final Rating – 6.5 / 10. A baffling final couple minutes sets the stage for Godzilla 2, hopefully we get more destruction and less distraction with that one.