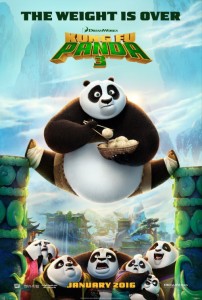 Not much changes in the world of Kung-fu Panda. Po (Jack Black) is the unlikely panda turned Dragon Warrior, a sentinel for decency in a land populated by talking creatures. Po is watched over by ageing master Sifu (Dustin Hoffman) and assisted by creatures of varying size all voiced by celebrities.

Only the bad guys change. With the arrival of the deceased Ugwey’s former nemesis from the spirit world, armed with the skills of many masters, Po faces his biggest test yet, and along the way he finds his true ‘home’ village and learns the true Way of the Panda – namely the Way of Laziness.

Speaking of the way of laziness, the funny part about Kung-fu Panda is how set in its ways it is. The animation is typically flawless, the characters and voices unchanged, the plot similar and the jokes come from the same futile ground. Unlike the Pixar stable though, Kung-fu Panda is content to remain in its lane.

For all of Coldplay’s alleged blandness even they managed some early peaks. While so far across three films the franchise can boast three ‘worthwhile’ entries, it cannot lay claim to anything beyond ‘quite good’ yet. And with many inevitable sequels to come it troubles me that this may be unlikely to change. Kids might differ, they might be happy with always likeable, never exhilarating.

I want more for the younglings. I want them to have films that astonish them and define their youth. I don’t want them growing to learn to just accept that the music they hear on commercial radio is ‘good enough’, I don’t want them to grow up to like the first two decades of Will Smith’s career.

Final Rating – 7 / 10. Kung-fu Panda 3 is solid and entertaining. But if it continues to refuse to risk greatness it seems a gateway drug to Transformers.