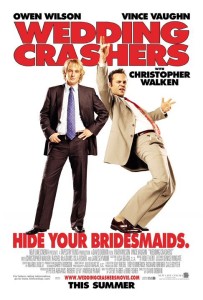 John (Owen Wilson) and Jeremy (Vincent Vaughn) are highly paid divorce lawyers who – instead of using their obvious wealth and reasonable looks – attend the weddings of strangers to use the buoyant moods and festive occasion to bed drunk chicks. It works despite no-one ever knowing them. I mean a montage tell us! And montages don’t lie…
This is the last wedding of the season. The big one.

All goes swimmingly, until John breaks the golden ‘crasher rule’ of not falling for anyone. And not just ‘anyone’, a senator’s daughter (Rachel McAdams) already on the arm of a handsome young high society stud (Bradley Cooper). This especially cramps Jeremy’s style, as he has just farewelled the young woman he banged on the beach, thinking she would never be seen again. Only she is the senator’s other daughter. These guys sure know how to pick ’em.

Again no-one at the wedding reception knows them, but of course they manage to wangle an invite to the ‘family only’ pre-wedding vacay, where John will develop blue balls trying to vie for the affections of the already open for Claire, while Jeremy is being hunted by the suddenly voracious Gloria.

To recap: two wealthy young handsome guys go to the most joyous and personal events to bone susceptible strangers. Then we are meant to feel empathy when one of these opportunistic liars – yes liars – falls for a nice young lady, only to find that Faked Love doesn’t run smooth? And is his love any purer just because the incumbent is a dick?

Look, I really truly endeavour to not Grinch these things up, and I can find humour and enjoyment when it is there. I liked The Adventures of Ford Fairlane for goodness’ sake. But the humour here is all broad stereotypes and cliches; he’s flagrantly gay, they’re defiantly homophobic… Or racist… Or both. He’s homicidal – in a funny way.

“Oh just ignore the stereotypes and watch the guy using a fake name and a fabricated backstory attempt to bed the young woman” you say? Well I certainly tied, and admittedly there are some genuinely amusing moments (and plenty boobies)’ just not as many as has been made out by those dubbing this ‘classic’.

Ultimately Wedding Crashers just perplexes me. There are set-ups that seem ripe for comedy. A cast that is similarly promising, with a mix of new faces and old – and Christopher Walken!

Owen Wilson was in his lovable awkward and bumbling his words phase. Vincent Vaughn hadn’t yet set fire to his career with a half dozen lazy bombs. Will Ferrell was confined to a minor supporting role, which if you ask me should be his lot in life. Bradley Cooper!

Like the two leads and their stories, the film just wants to endear itself to you, even though it has nothing real or genuine to say.