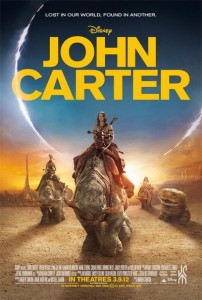 (* The sheer number of wildly different posters all saying nothing make it clear that they had no idea how to market this film.)

In the late 1800s John Carter (Taylor Kitsch) was a brave, strong and skilled warrior, a former captain in the US army no less, but now an ex-soldier determined to avoid conflict of any kind.

He is a serious and troubled man with a chip on his shoulder surrounded by combat hungry seagulls who would peck at it.

After an overlong start that veered dangerously close to tedious territory Carter becomes somewhat unwillingly embroiled in a running battle in the desert and awakens on Mars – or as the locals call it Barsoom – though Carter does not realise either of those things yet. On Mars/Barsoom Carter is superstrong and capable of leaping incredible distances, as a handy extra feature he is practically impervious to injury or damage.

This is all of great interest to the 10 foot tall Tharks, a green 4 armed, slender race with facial tusks who exist peacefully on the planet, fighting only in defence of their people and homeland. Unless that is the fight is between the members of the clan, the Tharks kick crap out of each other frequently, when battling over little Shrek-esque newly hatched babies, jostling over supremacy in the clan or simply by doling out punishment for perceived discretions, the Tharks are indeed a violent race – at least to themselves. In fact the only thing they claim not to do is fly, which is strange considering they look like giant grasshoppers, albeit wingless ones.

Unfortunately despite the (externally) peaceful Tharks, the rest of Mars – and the film – is a bit of a cluttered mess, for there are dueling humans on the planet (who else?) in high stakes conflict for the right to rule the planet, one race rides in blue ships and rocks a similarly coloured costume, while the other wears red.

These Martian Crips and Bloods have been waging a fierce battle which now nears a conclusion, with the almost defeated Crips defending their last bastion, the city of Helium, with every ounce of remaining strength. The leader of the Bloods (sorry it’s less confusing this way) offers a truce and an end to the feud, if the leader of the Crips grants the hand of his daughter the Princess Dejah in marriage.

If this isn’t all complicated enough aside from the pacifist Tharks and the warring Crips and Bloods there are also another race lurking on the periphery stoking the flames and nudging proceedings along like interplanetary puppet masters. These are the Therns (I think), shape changing creatures with a foot in both camps and their own self interest at heart. The lead Thern is played by Mark Strong.

But the Princess, who looks uncannily like a blue eyed Minnie Driver – only with 20 kgs of awkward ugly shaved off – isn’t about to ‘take one for the team’ and flees the city mid-battle with Carter, who promptly decides he like the Dejah View and sets off with the Princess, a disgraced and doomed Thark and his giant six-legged frog-dog to save multiple dilemmas simultaneously. (Kitsch by the way looks like a cuddly and less dangerous Jeff Martin, which might be an obscure reference to those not into defunct Canadian alterna-rock trios.) 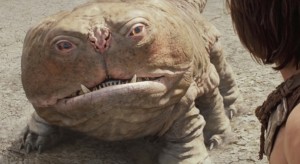 Six-Legged Frog-Dog. I want one!

Two things regarding the six-legged frog-dog: 1/ you knew it was sci-fi so don’t act surprised, and 2/ it’s probably the most likable thing in the film, definitely the most consistently amusing.

I held high hopes for director Andrew Stanton, after all here was the man behind the brilliant Finding Nemo, the excellent Wall-E and also intricately involved in many of Pixar’s many classics. And while John Carter is obviously live action it is sci-fi, and as such demands almost as much animation as a cartoon.

John Carter’s failings though are very much human error. There was an error in casting the wooden Taylor Kitsch in the lead, the man boasting all the charisma of a bar of soap, and for mine some of the supporting cast are atrocious also. But the fault can’t solely be theirs, which brings me to the second issue, the plot is pretty awful and the dialogue a mixed bag, for every witty one-liner – and there are a few – there are a couple of howlers which couldn’t possibly be delivered with a straight face.

Thankfully the stronger elements are there, in exactly the areas where you would expect a director with Stanton’s abilities to excel. The computer generated characters and backdrops are awe-inspiring and expansive, not the least bit cartoony, and one fight sequence featuring an animated horde Vs a solo Carter serves as the film’s highlight.

Unfortunately though while there are enough moments like this to keep you entertained the flaws are obvious and occasionally distracting.

Any sci-fi fan worth his/her (are there sci-fi ‘hers’?) salt should still check it out for it is an admirable attempt, but to the non-believers out there this isn’t going to be this decade’s Matrix, the sci-fi film that finds itself standing alone in a collection that is otherwise decidedly non-sci-fi.

Final Rating – 6.5 / 10. I wish John Carter was better. I wish it demanded to be remembered as more than a training run for the truly Great film Andrew Stanton will inevitably produce. But despite some gorgeous scenery, a couple of good one liners and two decent battle sequences John Carter is an uneven mess for the most part, with the human element and a frustrating plot contributing greatly to most of its weaknesses.