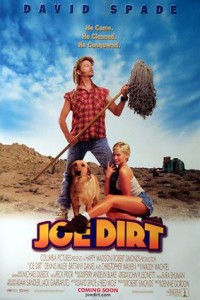 Joe Dirt is a throwback curio of a man. A diminutive warm natured redneck with a kind heart and a tiny brain. As such he is probably quite like David Spade, the actor playing him, although probably swap the size of heart and brain.

Dirt finds himself an adult still wondering why he was abandoned by his parents as a child. The shtick here is the usual ‘and in doing so finds that everyone in this unforgiving society drops what they are doing to fall in love with his story’. Mainly because he gets to tell his story on a radio show to a gobsmacked Dennis Miller – whose character has a name but is really just Dennis Miller.

So we learn the same self indulgent Sandler-lite crap that you would expect. Joe Dirt is friendly, loves all races, and is adorably moronic and innocent. And of course he has a hot best friend with big tits.

Joe’s mission might be find his parents, but the film’s mission is to cram as many shit jokes in as possible. In fact the film’s best moment comes in a scene where a dog’s ball freeze to the front porch.

Joe Dirt is light, fluffy and less obnoxious than some. Spade calls in every Saturday Night Live and celeb buddy favour he can – not one of which proves memorable – and all the while you wonder why this 35 year old ‘kid’ doesn’t move on with his life?

The fact that there is a Joe Dirt 2 makes me wonder why David Spade doesn’t do the same thing.

Final Rating – 6 / 10. Spade knows what an audience wants – he’s seen his friends do it – it’s just that he isn’t capable of it himself… 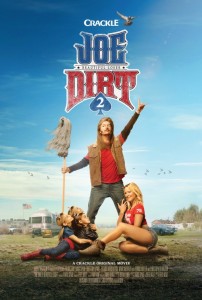 If there’s one first world social skill that forgettable redneck and sanitation professional Joe Dirt learned in the fifteen some years since his vaguely amusing cinematic misadventures, it’s recycling.

In this instantly regrettable retread the film trundles out Dennis Miller, Christopher Walken and other cameos, and sets them against a subplot that steals… Recycles… From Forrest Gump, Back to the Future and the Wizard of Oz.

Perhaps the saddest thing though, is that everyone involved knows that you don’t get full value for scrap.

Actually no, the saddest thing is that, in one of the ‘original comedy’ scenes, Joe Dirt gets farted on for two entire minutes. The fact that one of the farters is a shapely young woman is apparently high concept.

The rest of the ‘jokes’ seem to revolve around how unfunny the characters jokes are. We get it Joe, we’re watching. We know how unfunny it is.

To recap; all the characters you’ve long since forgotten existed and have never once wondered about, are back. All the jokes that didn’t quite work the first time are back and definitely not working here. All the cameos and poorly chosen clumsy film references you’ve come to lament – all back.

Joe Dirt 2 is the film Joe Dirt the cleaner would be called in to mop up, quickly, to save the decent people from having to deal with the unpleasant reality that it even exists.

But every time you are in the park and you smell dog leavings that someone neglected to pick up, you’ll know.

Final Rating – 4 / 10. Spoiler alert: This time around Joe’s balls get caught in an airplane toilet. The end.