Queen of the Damned (Review) 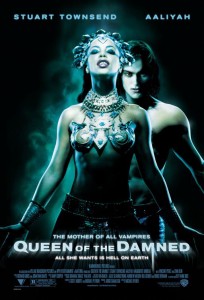 It doesn’t seem to matter whether you recall the events of Interview with the Vampire, a lushly presented Tom Cruise / Brad Pitt snoozer from a decade prior, because Queen of the Damned is world’s apart both in terms of presentation and tone. In fact the only unifying feature is that it is equally – if not more – dull.

The Vampire Lestat awakens from a lengthy slumber to find a new world full of the pasty, the disaffected, the night loving, perpetually apathetic, perpetually sulking, goths. People just like him, only without the insatiable appetite for blood.

Lestat uses his vampiric status as a hook, and his unbridled ego to drive him, and joins a band that sounds like Korn and Stabbing Westward (and apparently uses the songs and vocalists of both) and instantly rises to the top of the charts. (Strangely enough I quite liked well over half of the rawk songs on the soundtrack.)

But while Lestat revels in his newfound global adulation, he awakens the Queen of the Damned (Aaliyah), an equal opportunity killer of both vampire and human alike. Whether that’s a good thing or a bad thing, well I’ll let the film tell you. Mainly because for the life of me I can’t remember, as I checked out early on this bloodless farce.

The film falls in love with a blurry speed effect to express vampiric movement, while somewhat ironically the film moves so slow that it threatens to put us to sleep. The only character who warrants such slow motion is Aaliyah’s Queen, who oozes slinky sexuality as all about her merely leak boredom.

The film itself can’t make up its mind as to which gear to engage. Are the vampires angry at Lestat for his brazen profiting of his vampirism? Is the Queen threatening to end all life? Is it weird to anyone else that the softly spoken dweebish looking Stuart Townsend can bust out with the Korn frontman’s voice when onstage?

Instead it sits in one spot stuck in neutral, while we look about hoping for something interesting enough to warrant us focussing our energies elsewhere. I’m happy for the storytellers to tell us that vampires are noble and beautiful creatures, but you then opt to place them in the world of goth? That’s the equivalent of getting Stephen Hawking to invent a better selfie-stick. A patent misutilisation of a skillset.

Final Rating – 5 / 10. No number of blurry effects can give this undead film any life.