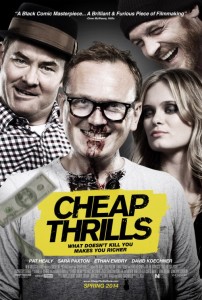 Dunno why you morons are smiling.

Cheap Thrills picks at its one note premise until it bleeds, meaning punters who enjoy sloppy execution and being bludgeoned to death without ever being asked to think can rejoice.

A seemingly beige young citizen runs into a former schoolmate in a bar. They spend the evening swapping stories that illustrate how their paths veered dramatically since the scholastic days.

Craig has a wife and baby at home. Vince is single and carefree. Craig has a mortgage and needs money bad. Vince is a thug for hire, and apparently that suits him just fine.

Things take a turn for the worse – for all of us – when the pair meet Colin and Violet. Colin is played by the perpetually vile and unfunny David Koechner in full bluster, and Violet is the out of his league beauty without much to say, but she is always watching and listening.

Colin has money and is incessantly dribbling out lame challenges to Craig and Vince. Challenges for money. Bar bets.

It starts small; get the girl to slap you. Make that random guy angry. First guy to blah blah blah. But the stakes – and the money on offer – quickly escalates, especially once the foursome adjourn to Colin’s spacious well appointed home.

Correct me if I’m wrong but even a black comedy needs to be either amusing or droll. This is neither. It doesn’t help that my first response to David Koechner in any film is checking how long there is left in the running time, but here he arrives early and remains late – far overstaying his limited welcome.

Cheap Thrills goes where it needs to go to satisfy the ‘dark’ themes, but given no-one earns our sympathy or demands we root for them. Some might be happy watching four unlikeable characters pushing a singular concept far beyond interesting, but not me. For most of the film I sat there like Violet, silently watching and listening, only not nearly as engaged.