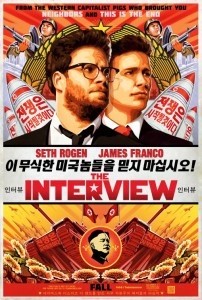 Dave Skylark (James Franco) is the handsome and somehow popular host of light entertainment show Skylark Tonight, the kind of show that delights in pointing out which quasi-celebrities lost or gained a couple kilos, or better yet who has embarrassing secrets. When Eminem comes out of the closet live on his show, the joy on Skylark’s face is palpable, as if Slim Shady is telling him he his giving him a mansion.

His is a frivolous and unnecessary show, but Dave badly wants to believe that it could be serious if he wanted it to be.

When Dave and producer and best bud Aaron (Seth Rogen) learn that Kim Jong-Un has listed Skylark Tonight among his favourite things – presumably somewhere after Dennis Rodman – they decide to reach out to the leader of North Korea for a sit down, hoping that this coup will provide Skylark and his show with some much needed street cred.

Of course Kim Jong-Un accepts – although very much on his terms and on his turf – and so Dave and Aaron find themselves in the home of a dictator, surrounded by heavily armed soldiers and KJU’s political yes-men and women.

Before the journey however, Dave and Aaron are approached by the CIA, who want to seize the opportunity afforded by this nearly unprecedented access to have Dave covertly slip Kim Jong-Un some poison.

It is undeniable that this topic is ripe for satire and lampooning, but The Interview opts instead to always take the low road. Not only is Kim Jong-Un a one-dimensional character obsessed with indulgence, extravagance and power, but he and Dave are so alike that they could be brothers. This isn’t a good thing, as both are different sides of the same idiot mirror.

The conundrum is that the one lever that continually provides mirth is the one that renders the main crux of the film unlikely – that being Dave is a total moron. When with Aaron Dave is entirely unfettered and relaxed, but his every babbled comment betrays a lack of depth and intelligence, and a field of vision that only sees sex, drugs and more sex.

All other laughs emanate from comments that betray cultural insensitivity on both sides. And when things threaten to get momentarily serious – hey let’s all go for a ride in my tank! I must admit that I laughed frequently at the puerile humour and stupidity of it all, after all I’m a shallow guy. But anyone pretending to take this as a subtle satire of anything is fooling themselves.

The Interview is as hard hitting as one of those inflatable guys near tyre stores, as insightful as the average toddler regarding world events, and most of all serious and important as an LMFAO song.

It’s the last bit that should matter. Hundreds of world leaders, reporters and columnists have taken potshots at Kim Jong-Un and his regime, none have had the audacity to do it using his favoured platform of a tongue in cheek movie obsessed with dick, shit and gay jokes. By reacting as they did, North Korea only proved the only thing the film insinuates – that they can’t take a joke – although I don’t think anyone presumed that they would show this by threatening acts of terrorism.

If North Korea really wanted to take the higher ground, it should have pointed out that The Interview does more to make the United States look like idiots than it does to cast aspersions upon the country of North Korea and their tyrannical leader.

This is too dumb a movie for anyone to take seriously. If Franco and Rogen invented a dictator from a fake country and released the film, no-one would give a shit. The film would make pretty much what Pineapple Express and This is the End made, and Franco and Rogen would get high and DM a bunch of dick pics to Twitter followers with attractive avatars.

Instead, they used a real name, had the guy explode in a ball of flame, and with one childish movie moved the needle a smidgen further toward global conflict. If Katy Perry and Pink do a duet about short, fat, insecure Asian guys in 2015, kiss your children goodbye…

(It’s a sad state of affairs when mildly talented celebrities and ex-sportspeople have more influence than political leaders and their demands.)

Final Rating – 6.5 / 10. As an infantile comedy it is often a funny one. As a political statement it really isn’t one.