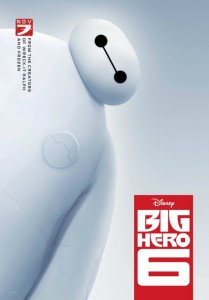 Thanks to having an 8 year old I watch quite a few kid friendly films these days, but because I believe (hope?) that this website doesn’t attract much 7-12 year old traffic I don’t tend to write about many of them.

Big Hero 6 does enough to warrant an exemption to that rule, being one of the rare films that crosses the generation gap, providing chuckles for the adults, gasps from the children, and genuine enjoyment for both.

Set in the future in the fictional city of San Fransokyo – which is indeed a combination or San Francisco and Tokyo, and an amazing one at that, Big Hero 6 is a little bit How to Train your Dragon, a little bit ‘Introduction to superhero 101’ for young kids, and a whole lot of vividly coloured backgrounds and hectic – yet non-threatening – action.

The story opens with and follows young Hiro. An early teen who is nonetheless already an inventing prodigy, coming up with ideas that may shape the future. While Hiro looks up to cool older brother Tadashi – a student at the tech department of the prestigious local university – Hiro is determined to blaze his own path, and he sarcastically shelves any thought of ‘nerd school’. However after a late night visit to check out the facility, where Hiro encounters the decidedly un-nerdish students and their world renowned faculty head Professor Callaghan, he changes his tune and decides he very much does want to follow in Tadashi’s footsteps.

It is during his presentation at the annual inventor’s expo that Hiro’s life is changed forever. After wowing all on hand, including Professor Callaghan – who hands Hiro an admission slip to his class – and the wealthy businessman Alastair Krei, there isn’t time to toast to his success before a fire breaks out, leading to a huge explosion.

The funeral for Tadashi and Professor Callaghan is a sombre one, and it seems like nothing will extricate Hiro from his black mood.

An innocuous bump leads to the inadvertent discovery of Tadashi’s last innovation. His name is Baymax, and he is a medical droid wrapped in a non-threatening wrapper of inflatable plastic. While initially a sterile and unaware entity, Baymax and Tadashi strike up a stilted relationship which grows through the film – ultimately becoming central to the action and a provider of much of the abundant chuckles to be found here.

When Hiro and Baymax team up with Tadashi’s former lab-mates the action heats up and never relents until the credits roll. Some of the flight and fight sequences are simply incredible, leading to me checking if my son was catatonic or sitting in awe – he was not catatonic. This might prove the gateway drug to Guardians of the Galaxy and the extended Marvel universe that I have been looking for.

The plot moves in areas not intimated by the poster or most previews (they seem to get more desperate to attract ticket buyers the more time passes). As mentioned the action is kinetic and frenetic but never frightening for the little tackers, and while the humour is almost exclusively PG (as you would expect in a PG film) it is clever and amusing enough to work on adults; or maybe it’s just me that likes underpants jokes…

Final Rating – 8 / 10. I have been reliably informed by my son that Paddington is an exceptional film for young kids (I myself haven’t seen it), but for my money it will be hard to go past Big Hero 6 when it comes to accessible entertainment for the whole family this year.