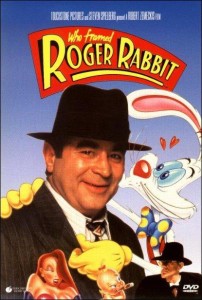 Who Framed Roger Rabbit was an amazing accomplishment upon first release. A meld of animation and live action the likes of which were never seen on this scale. It brought together beloved cartoon characters across many companies and rights holders. It made a hand drawn redhead an instant and lasting sex symbol, and it inspired a then fourteen year old idiot to practise for days to get the Roger Rabbit P-p-p-p-p-p-lllllleeeeeazzzze! catchphrase down pat. I still drag it out occasionally to this day… (When no-one is within earshot.)

Then of course it indirectly lead to Space Jam, so I guess it isn’t all good.

When Private Investigator Eddie Valiant (Bob Hoskins) is gifted the case of snooping on cartoon star Roger Rabbit’s curvaceous wife Jessica Rabbit, he has no clue that it might lead to a bigger plot with the potential to change Toontown forever.

Eddie doesn’t like Toons – they killed his brother. So he is further perturbed when he becomes reliant on Roger Rabbit to get to the bottom of things, what with the wisecracking but blithering idiot’s over-riding urge to entertain and please at all times.

Set in an alternate universe where mans coexist with cartoon characters, and against a backdrop that has a distinct noir 1940s feel, it is inevitable that Who Framed a Roger Rabbit would feature a cast of thousands of brightly coloured and often instantly recognisable characters. And indeed the film has turns by such 2D luminaries as Betty Boop, Mickey Mouse and Daffy Duck. But make no mistake this is the Bob and the Bunny show.

You can only imagine what contraptions, pulleys and levels when into making the interplay between Bob Hoskins and a series of hand drawn sketches seem so lifelike. Even though it isn’t always seamless, the film is undeniably creative and often very funny, just like real cartoons once were.

WFRR? is warm, whimsical and young kid friendly. It might not date well in an age when young kids have grown up on Tellytubbies, Power Rangers and Yo Gabba Gabbas, but for adults it is an amusing stroll down a technicolor memory lane, and a welcome reminder of a day before CGI ruled kid’s cinema.

Final Rating – 7.5 / 10. Am I suggesting that you should overlook this late 80s kiddie flick? P-p-p-p-p-p-lllllleeeeeazzzze.