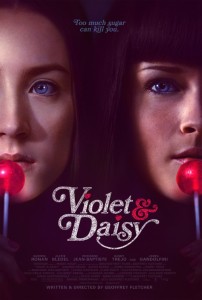 This is that ridiculous a film.

Consider the nun subterfuge; Violet and Daisy walk the halls of a hotel in full penguin garb, only to shed any semblance of disguise once they spy their target, drawing and firing big fucking weapons.

They then flee on a bicycle, so carefree and cutesy-pie.

Only this next job is a doozy. As good little employees Violet and Daisy arrive early and set up camp in their target’s very home, only they is so vewy tired that they pass out asleep in the couch; 100 combined kilograms of adorable assassins, the central characters in history’s most excruciating fable; “But Ma and Pa, the teeny tiny killers are still here, and they are asleep!”

Michael, the former target, now has the upper hand, which he gladly yields even after the girls awaken from their slumber and groggily giggle the reason for their presence.

This film is so fucking lazy and reliant on stupidity – both by the characters and the audience’s – that it is impossible not to hate. Violet and Daisy are so blasé and confident, yet so very fragile and shy, that you just want to punch them. There is a sequence where one of them – they are both so obnoxious that I never bothered learning their names – outsmarts four grown bad guys with some of the most infantile dialogue this side of kindergarten, before the girls joyfully jump up and down on the corpses to… I don’t know, ‘bleed them out’ or something?

This is ridiculous and insulting. Sucker Punch was a saccharine disaster, but at least it knew it was mindless sugar-coated popcorn, and it did boast a few memorable images. This film thinks it matters. It thinks it is Leon crossed with Pulp Fiction, even while any comparison disgusts any person who has seen either of those films.

Both Violet and Daisy the characters and the film have all of the sincerity and class of a drive through restaurant transaction, with the product being of similar quality and having the same lasting goodness.