Dawn of the Planet of the Apes (Review) 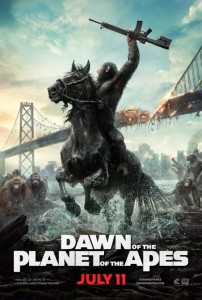 This image represents the least of the film.

When we left the solid but not spectacular Rise of the Planet of the Apes, the recently escaped Apes (esc-Apes?) were fleeing to the hills outside San Francisco, leaving humankind stewing in rage below.

Ten Winters have passed. The experimental concoction tested on the apes has proven a disaster, lethal to the overwhelming proportion of the human population. Retrospectively dubbed the ‘Simian virus’, the spread and impact is astonishing, leading to a Sliding Doors moment. While the remnants of human kind lurk and cower behind bars among the ruins of a once proud and dominant society, fretting about their diminishing power supply, the Apes are building a new community in harmony with nature and each other.

The humans are essentially a rabble, bickering and talking over their leader Dreyfus (Gary Oldman), while the Apes are an organised group with defined roles and a distinct hierarchy, working unison.

Atop the societal pyramid is Caesar (Andy Serkis), the leader of the initial escape from Rise. Now the dominant male and the one all eyes look to in times of conflict or indecision. In fact he carries himself much like Drago, the leader of the Dothraki tribe in Game of Thrones, ruling with an iron fist and demanding unquestioned loyalty and respect. Only Koba – Caesar’s right hand monkey – dare second guess the leader’s commands, and even he does so rarely.

To recap; humans a fragile rabble huddled in ruins. Apes living harmoniously with nature in an environment of trust and unity. Pick a side people!

But looks are deceiving, and fear creates indecision and friction. When the two disparate tribes do chance upon each other, the initial uncertainty leads to an unpleasant outcome. While catastrophe is averted, the incident does little to sway the Ape’s opinion that humans are evil, especially given both Caesar and Koba’s experiences in the testing labs a decade earlier. It isn’t just elephants that never forget, though they aren’t as limber and mobile through the treetops.

Most of the human presence in the film is actually one family, Malcolm (Jason Clarke), son Alexander (Kodi Smit-McPhee) and girlfriend Ellie (Keri Russell). The rest of ‘us’ are essentially either cardboard cutouts or thoughtless morons awaiting their turn to fuck things up. Even Gary Oldman only has enough minutes in the film to tick off his appearance in another franchise. Though it must be said that the ape women don’t get a fair shake either, only Caesar’s missus gets more than a couple seconds screen time, and that’s standing at the shoulder of her man.

Female Ape-American actors should picket Hollywood for this injustice…

Of course both human and ape have rogue elements that don’t always toe the company line, and the words of the wise aren’t always heeded by even those who mean well. There are a few moments where someone either speaking up or shutting up could have slowed the escalation of events, but without bad decisions and stupidity, conflict isn’t forthcoming. And without conflict, what movie?

The first hour of the DotPotA (I suggested ‘Monkeys 2’ but was shouted down) is never less than compelling, stringing together of excellent scenes within a plot clearly building towards something.

You know where it will end, but have no idea how it might get there. You only know that you want to be there when it does.

The imagery of Dawn is awe inspiring, something about large groups of magnificent creatures amassing around their hapless prey is both ominous and awe inspiring; ditto watching the apes move fluidly en masse through the trees (with conveniently uniform branches for maximum swinging efficiency). The hillside ape settlement is easily as cool as anything from the Star Wars trilogies, and of course the apes themselves…

…the apes are for the most part (riding a horse seems janky) unbelievably believable. Watching them converse and co-exist in the early stages is somehow peaceful and affirming, until you pause to wonder when the DVD extra with a bunch of guys wearing leotards and covered in ping-pong balls might arrive to make you feel foolish.

It’s a testament to the film that you rarely have time for those thoughts though. I actually found myself rooting for the apes and resenting the humans with their stupid decisions, silly clothing and seemingly random hair patterns. And the ape city frankly looks like a better place to live anyway.

But even the idyllic life of a fast evolving ape isn’t without issues. The way the film can make us believe that escaped monkeys can build a community, a means of communication and an identifiable leadership group in a mere decade is admirable. Expecting us to swallow that an ape who picked up a weapon 15 minutes ago is suddenly channelling Sly Stallone from Rambo 3, riding a horse bareback and firing two automatic weapons accurately with either hand; is less so. Dawn of the Planet of the Apes is not a comedy, but I laughed more than a few times in the dozen or so minutes of action.

This momentary distraction isn’t the fault of director Matt Reeves, after all his CV to date is hardly full of popcorn flicks. If we ignore his turn as JJ Abrams proxy at the helm of Cloverfield (middling), his only other feature length film to date is Let Me In (the English version of Let the Right One In) a slightly patchy but credible drama that at worst is a worthwhile remake (of a film that didn’t need one).

With Dawn of the Planet of the Apes Matt Reeves has made another fine film from unlikely source material. We can’t excoriate him for having the audacity to agree to a blockbuster, where a certain level of teen-distracting fare is more a requirement than an optional extra.

While the action is more a ‘distr-action’, it is Reeves’ flair for drama that lends Dawn it’s most noteworthy sequences – indeed the first 90 minutes are mostly excellent. The aforementioned Rambo moments that lead to the Iron Man 3 standoff atop a partially ruined skyscraper might leave the teens scrambling into mum’s car on a high, but represent a slight misstep for the progression of the franchise.

And make no mistake, with a solid first film and a very, very good follow up, this is destined to be a franchise; and I for one can’t wait to see what Ape Nation – and the human guest stars in the next ‘episode’ – get up to next.

Final Rating – 8 / 10. Apparently the Rise has lead to the Dawn, and this seems to be building into a highly worthwhile day to be an Ape Aficionado.