Let Me In (Review) 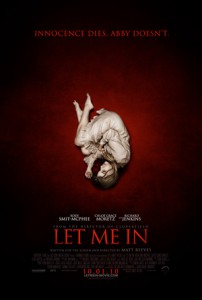 The most original thing is the poster.

I have 2 very good reasons for thanking director Matt Reeves for the job he did with Let Me In.

For the last 10 or so days since I watched the Swedish original Let the Right One In I was dreading what might happen if someone tried to jazz the film up or “Americanise” it.

Thankfully I can report that this is far less a remake of the Swedish film than it is a facsimile of it, only with English as the spoken language.

In fact the first closing credit is “written for the screen by Matt Reeves”, surely given the fact that this film is 95% the same (minimum) as the original maybe “Translated into English by Matt Reeves” would have been more apt?

That said this could have been much worse, and I guess if this version introduced a film to people that couldn’t be bothered reading subtitles then it was a worthwhile exercise. For the rest of us it at least gives us a choice as to whether we want to watch the film with subtitles or in English.

If it is not yet clear this film and the original share the same plot and characters, therefore I would point you here for a more detailed description of the plot for both. In this space I will simply point out the differences between Let Me In and Let the Right One In – in non-spoilerific fashion.

Changes for neither better nor worse.

Just like the fact that it is rare that a remake of a song sells more than the original – unless Kanye is somehow involved – it must be hard to take a truly GREAT film and do anything to stand out.

Watching this film reminded me of Groundhog Day, where Bill Murray’s character has learned all the do’s and don’ts about how to get into Andie MacDowall’s character’s pants, but rushes it rather than take his time to let it happen. Of course he inevitably fails because he tries too hard to force the issue – until he learns to just be himself and let things flow.

Matt Reeves is hardly forcing things with his Let Me In, but aside from the fact that he at least didn’t mess things up – which could have been very easy to do by the way – is the only real superlative I can give. After all, I could learn the lyrics to U2’s “One” and record me destroying them on CD (even if I didn’t try to!) and claim it as my own work, but even if I wasn’t a tone deaf lousy voiced singer (I am) it wouldn’t stand up to comparison with the original.

Therefore I again thank Matt for treating the story and characters with dignity, I recommend that everyone watch this rather than Twilight or even Paranormal Activity 2, but I can’t say it is as good as the first even though on the screen it seems to be.

Final Rating – 7.5 / 10. If you’d rather spend $20 to save yourself from reading a movie then go ahead. Just know the same movie – only better – is in the weekly section of the DVD shop (probably filed under “They talk funny”).