Rise of the Planet of the Apes (Review) 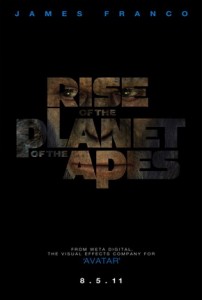 When a failed presentation nearly leads to the entire project being shut down, research scientist Will Rodman (James Franco) finds himself raising both a newborn monkey (saved from ‘disposal’) and his elderly Father (John Lithgow), who is stricken with Alzheimers, the very disease the serum being tested was meant to cure.

The junior chimp is dubbed Caesar, and as he grows it is evident that his mental abilities are clearly in advance of children of a similar age, let alone other apes. Caesar and Will communicate by sign language, and he is trusted to the point that he is allowed quite a level of freedom around the home.

Unfortunately as fast as Caesar is developing, Will’s Father continues to regress. 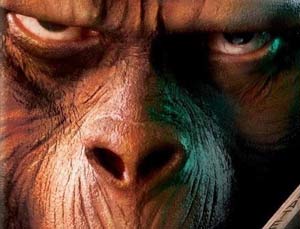 This leads to some drastic measures being taken which in the early goings have an indisputably positive impact.

The following year sees more developments, Caesar is growing and maturing, now too big for the modest home he accompanies Will, his Father and girlfriend Caroline (Frieda Pinto) to outings in the local redwood forests that apparently fringe San Francisco.

Here Caesar has all the freedom he can handle, thanks to his understanding and a bond forged by trust between he and Will.

But even now the signs are not great, Caesar is in ape years an unruly teenager, he starts resisting forms of control, and exhibits aggression and displays of physical strength at times, one of which leads to him being admitted to an institution for a huge number of monkeys, apes, gorillas and orang-utans.

Caesar’s increasing intelligence and awareness of his surroundings are evident even before he enters monkey jail, but once inside and thrust among his own species for the first time in a fiercely competitive – almost tribal – ape hierarchy, Caesar is almost always deep in thought and planning ‘bigger things’.

There are the obligatory mistreating handlers to be railed against, onlookers who don’t understand and of course greedy corporate types who see only profits. After the initial half hour Franco is mere window dressing,  which is at least more than the under utilised Frieda Pinto can say. She has but to look amazed, in love or surprised, depending on the news she is receiving, in a role that suggests she should be the audience barometer:

“I am surprised by this. You should be too!”.

There is some action in Ascending Apes, though not of the gung-ho blood n guts variety, the entire film is extremely PG 13 all over.

Finally the most obvious thing I took away was that this all ain’t over, this was the rise to be sure, and there is far more to come. I think Caesar and his gang have done well with ‘Rise’ to build a platform, I hope the monkeys, gorillas and apes in the inevitable sequel ratchet things up a notch and start administering some ass whippings.

No point rebelling against your masters if you’re just going to chill in the local forests.

I shouldn’t be disappointed. Rise of the Planet of the Apes was a good popcorn flick and I guess everything I expected. I just wanted to be blown away with a balls to the wall Man Vs Wild thing, and was a little less surprised with what was essentially a prison break film  with the escape lead by a hairy CGI monkey John Connor.

Final Rating – 7 / 10. We want our pop-corn flicks to have brains so I should applaud, especially when Caesar has a higher IQ than 95% of action stars combined. I just hope that the sequel allows a little more chest beating.