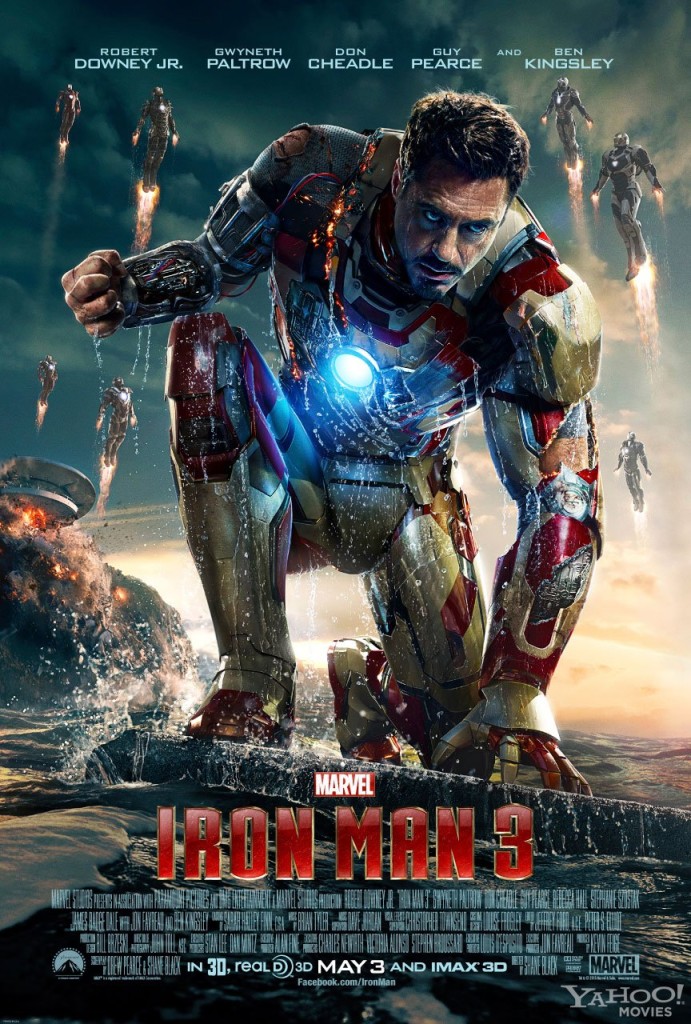 There’s a stigma attached to sequels. They are instantly deemed to be somehow less in every respect when compared to their predecessors. It is not the quality of Iron Man 3 that will see it unfairly lumped with a bunch of ‘also rans’ and relegated to the honourable mentions when the 2013 Best Of lists come around, it is the ‘3’. So despite the very impressive 93% Rotten Tomatoes ‘Fresh’ rating, Iron Man 3 won’t get the praise it so deserves.

So I’ll be the one to say it. Iron Man 3 is not only the best it in the series, it is the best Superhero movie this side of Christopher Nolan’s Batman trilogy. Better than The Avengers. Better than Captain America. Better than… Oh I forgot I rated them all here.

The most remarkable thing was that Iron Man didn’t even need to be broken down and rebuilt like Batman (and James Bond) did recently. As Tony Stark himself says, a skilled mechanic can take the core elements, add a couple new components, then tinker and enhance.

Iron Man 2 saw the franchise lose its way a little. The Stark / Roads dynamic had become a little stilted; was Roads gonna be a goodie or a baddie, a sidekick or a rival? So too was the relationship between Stark and Pepper Pots; are they a happy couple, a hot and cold fling, business associates?

The action scenes too are better, with no less than three sequences in this film that are the equal to or better than anything in the original film (and streets ahead of IM2), and the finale is near as good as that of The Avengers.

That said, undoubtedly the best inclusion in this edition is the writer/director Shane Black. He gives Tony Stark some more toys to work with – his armoured suits especially almost become characters in their own right – and who better to feed Tony Stark pithy and dry witted one liners than the guy who wrote The Last Boy Scout and The Long Kiss Goodnight? Black also respects his audience. Iron Man 3 has dozens of quips and clever comments, but there are also set ups to jokes that don’t pay off for an hour or more, and when they do arrive it isn’t with a big neon arrow emblazoned with ‘remember?’. It’s obvious that the film has enough big noisy explosions and easy laughs to satisfy the regular schmo, but it is these moments and finishing touches that elevate the film.

Black also tinkers with the formula. He relegates Pepper’s role to the sidelines early whilst simultaneously providing her with relevance beyond someone in need of saving. (I thought Pepper Pots was an annoying frivolous inconvenience in the second (inferior) film. By the end of this edition I can’t wait to see where here character ends up.) Roads’ role is defined, he is an ally, but only in a ‘break glass in case of emergency’ basis to be used at the convenience of the plot.

Most importantly he gives Tony Stark genuine enemies to confront beyond a former associate or business rival in The Mandarin (Ben Kingsley), a man of middle eastern appearance who has set off a series of explosions across America (I can’t say enough about The Mandarin. Just know Kingsley nigh steals the film.). In his white collar non-metal suited reality Stark must deal with Aldrich Killian (Guy Pearce), a scientist to whom Stark gave the cold shoulder in the past, and on the home front Maya Hansen (Rebecca Hall), another scientific genius, reappears, only in her case Tony previously gave her… Whatever the opposite of the cold shoulder is.

All of these tweaks allow us more Tony Time. While the character hardly needed reinventing, he welcomes an oil change and a time out to think about his direction. By the conclusion of this film it is clear that there is much more for this self-made superhero to achieve, whether it is with the Avengers supergroup or on a solo basis.

So in summary, Iron Man 3 has the best action scenes in the series, it feeds Tony with some of his best lines – especially in scenes with a young boy who helps Stark rediscover his mojo – and the supporting cast are better utilised. I really liked Iron Man and still feel it is one of the better examples of a pure popcorn superhero film. This film is better in every respect and doesn’t carry the baggage of trying to introduce elements and characters into The Avengers universe.

Shane Black is the best man available in Hollywood to take the helm of a superhero movie. It’s frankly amazing he hasn’t been given a job before now, seeing as he is solely responsible for creating the characters of; Martin Riggs in Lethal Weapon, Joe Hallenbeck in The Last Boy Scout and Charley Baltimore in The Long Kiss Goodnight, all plain clothes superheroes in their own right who constantly spout Tony Stark styled dialogue.

It’s amazing that it took so long for someone to put two and two together and realise that this is the guy to take the charismatic Tony Stark into a new era.

Above all else the fact is that I cannot wait to watch this film again. Iron Man 3 is hands down the best film in the Iron Man series, but it’s more than that. It’s a great superhero movie and could well be the best superhero film of the year. Actually it’s a lock to be one of the best films of the year.

Final Rating – 8.5 / 10. Replacing former mechanic Jon Favreau with Shane Black proves a masterstroke, there is a lot of life in this franchise yet, but if this film proves the conclusion to a trilogy it is a most satisfying one, and the best film with a ‘3’ suffix this side of Toy Story 3.