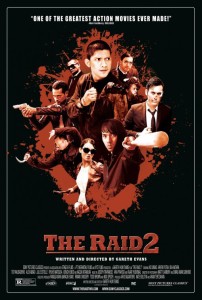 The Raid was an incredibly pleasant and unexpected surprise when it exploded on the scene in 2012. Who could have anticipated that the best martial arts film of the millennium would be made by a white welsh guy and star an unknown Indonesian? (Let’s be fair, Indonesia isn’t the first name you think of when you hear the words ‘martial arts hotbed’.)

But that’s what happened. A simple – and simply brilliant – film that played like live action Donkey Kong with Iko Uwais as Mario, only consider the constant stream of barrels as waves of heavily armed bad guys that Mario must first defeat and then scale to progress higher.

It was bloody, action packed, visceral and frankly the most awe inspiring film since Jackie Chan’s glory days.

There was no surprise that we got a sequel.

It was a minor surprise that both the budget and scope of the film were slightly larger.

A moderate surprise that there was as much care and thought put in to expanding the world of The Raid.

The biggest and most pleasant surprise of all is that it is almost as good as the predecessor. Almost…

There were precious few survivors at the conclusion of the first film. The opening minutes of Raid 2 whittle that down quickly. With no remaining running mates our hero Rama is approached to go deep, deep, deeeep undercover in order to infiltrate the ranks of the really, really, reeeeeallly bad guys.

And after pecking his wife (who must be quite the patient woman) and newborn, Rama finds himself ‘disappeared’ and imprisoned as just another random thug (the subtitle ‘Berandal’ apparently means ‘thugs’).

So essentially the film plays out like an Indonesian Raw Deal, and poor old Rama hardly gets a moment in the next 120 cinematic minutes to pause for breath.

He piles the bad guys high in the prison, with an epic large scale fight taking place in a packed and extremely muddy courtyard. The action unfurls in long unbroken takes punctuated by sudden and bloody violence. (This film is even more violent than the first, actually much more.)

Now Rama is outside and under the wing of Uco, the charismatic son of the boss of the biggest crime family in Jakarta, although the operation is under constant pressure from an equally powerful Japanese crime syndicate. He is told to keep an eye on Uco, who is more than a little hotheaded.

This is where the film really opens up. The outside world is large and complicated, full of scummy criminals, hookers, hoods and various ne’er-do-wells.

Inevitably the two crime families eventually clash, with Rama once again in the middle of proceedings. But here he finally has a chop out of sorts. Spelling Rama for a couple of notable sequences are a homeless looking assassin (played by the inimitable ‘Mad Dog’ from the first film) who single handedly takes apart a nightclub, and ‘Hammer Girl’, a well dressed woman who makes The Bride look like a girl scout as she empties a subway car filled with Crazy 88 wanabees.

Non-action fans will deplore the violence, and granted the tone turns decidedly dark and some scenes may make even hardened action fans squirm a little. But those us who miss the glory years of Jackie Chan and Jet Li will applaud the continued ascent of Iko Uwais (and wonder what Tony Jaa did to piss off the God of martial arts movies), and the savvy and carefully thought out direction of Gareth Evans. It is his conviction and continued striving for quality that stymies the film just a little – at 140 minutes they could have saved one epic battle for Raid 3. But whinging about too much of a good thing seems selfish and misguided.

In the decade since Kiss of the Dragon it was easy to miss the fact that martial arts action pretty much sucked, to the point where we fooled ourselves into thinking Tony Jaa was the future.

But as two Raid films have reminded us, the martial arts genre wasn’t dead, just sleeping. we patient die-hards must shower Gareth Evans and Iko Uwais for waking it the fuck up.

Final Rating – 8 / 10. Lacks the winning simplicity that made the first a landmark, but an ambitious (if slightly bloated) epic with incredible action and well crafted sequences that will never grow old.