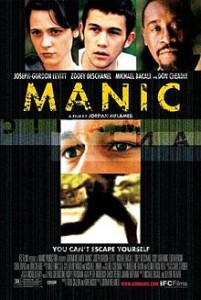 Manic is less a drama than it should be an example to teens that there are other kids out there with problems and issues that greatly outstrip their own calculated angst.

With that in mind I should point out that Manic is certainly not an uplifting tale about overcoming obstacles and rising above, it is an alarming, confronting and at times depressing film.

After another temper tantrum lands Lyle (Joseph Gordon Levitt) in a facility where he is surrounded with other young people with mental issues and demons of their own, he reacts – predictably enough – with more violence and resentment.

But in this environment no-one takes a backward step, and the staff and lead therapist Dr Monroe (Don Cheadle) find themselves keeping these teens from each other’s throats as they either prove to each other that they’re not soft, or in some cases because they just want to rip someone’s throat out.

Group sessions are often a flashpoint for confrontation, as the repressed emotion and pent up rage bubbles to the surface, elicited either by derogatory comments or resentment borne of the hatred of attention. Only meds, treatment and the care of the staff manage to keep the kids on the straight and narrow, but not all can be saved. In fact not all want to be saved.

The cast might be young and inexperienced in this modern day cuckoo’s nest, but they are uniformly good, bringing a human element to what could easily be written off as a ‘bunch of nuts’, and creating identifiable characters amid a plot that could hardly be described as linear.

Don Cheadle is excellent as a Doctor desperate to help his patients. He shelves his relentlessly positive cajoling occasionally to confront more serious issues, and his frustration is evident when even his best efforts don’t always lead to victories.

Manic is not a cheery film. It is a makeup free zone with no gloss, hooks, glitz or happy endings. It is the anti-90210 filled with battles both internal and external where the good guys don’t always win.