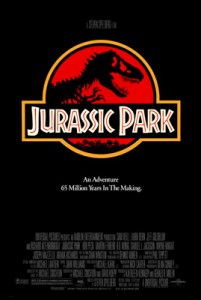 In the 80s Steven Spielberg showed millions of ticket buyers how much fun could be had at the movies, it seemed almost unfair to give that guy access to computer technology that could render the impossible possible, but with Jurassic Park in 1993 that was what happened. And I must say almost 20 years later they are some impressive fake dinosaurs.

When an eccentric wealthy Brit named John Hammond (Richard Attenborough) and his team of scientific gurus devise a way to genetically recreate any and all species of dinosaurs his first thought is to turn the whole thing into a theme park for the kiddies. Call me cynical but I would’ve thought that a very American thing to do.

Ummm, let me cut you off there; dinosaurs + people = threat.

Movie over right? Thankfully no.

Enter Dr Allen Grant (Sam Neill) and Ellie Sattler (Laura Dern), a couple of palaeontologists (dino-docs) that think painstakingly brushing away at the dirt to find tiny scraps of million year old bone is loads of fun – they’re in for a shock. Also in tow is a lawyer overseeing proceedings and a ‘professor of chaos’ Dr Malcolm (Jeff Goldblum) who is not a WWE wrestler even though the job title practically demands this should be the case but a mathematician who has the proverbial ‘very bad feeling about this’. To spice things up Hammond has invited his two young grandchildren along for the ride, sort of like bringing the teenage model daughter to an R. Kelly, Michael Jackson show. 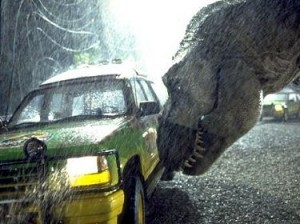 “Wake up. Is it time for my close up yet Steve?”

They explain how it all happens in preposterously possible jargon but who cares? I mean BRING ON THE OLD GIANT LIZARDS!

So off the three docs, lawyer and two kids head off in automatically piloted jeeps on a preset course through the park for a private viewing of the as yet unopened park.

Of course things don’t go smoothly for the maiden tour, our reluctant heroes spend much of the time screaming and running around covered in mud and followed closely by sharp toothed ferocious computer generated beasties.

Even though the movie is quite PG and reasonably safe for most kids in the double digits there are of course casualties, and I was pleasantly surprised to see that the first two munched on are a lawyer and an annoying bit character from Seinfeld.

Spielberg sensibly holds off with his coup de grace the T Rex but when he does unleash the big guy he makes sure that it is the centrepiece of the film and by far the best sequence. It has been often parodied since but the menacing ripples in the cups of water are quite foreboding, and the money shot of the big eye still works.

As alluded to previously the visual effects were absolutely astonishing near 20 years ago and they still hold up to close scrutiny today. It’s only a pity they didn’t think to take some pixels to Laura Dern, who it needs to be said has a face like a shoe (with apologies to Ben Harper).

As the character of John Hammond likes to say – frequently – he ‘spared no expense’ in making Jurassic Park. The same can be said of Steven Spielberg who really went to town with his new toy CGI, but while Jurassic Park might have been undeniably groundbreaking cinema, as a film it is only very good; not great.

Final Rating – 8 / 10. Spawned a couple of increasingly ‘samey’ sequels, but as is usually the case the original is still the best.