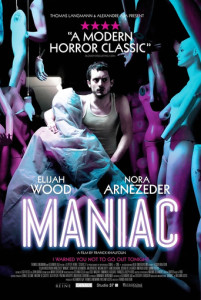 Elijah’s 2014 Christmas card was another classic.

Elijah Wood is a fine young actor who came to fame last decade by playing Frodo Baggins across three films. In this film he is Gollum, a small, pasty, snivelling and vicious little creature battling the voices in his head. And losing the battle at the most inopportune moments.

But Frank doesn’t care what others think. He will look. He will stalk. He will pursue. And if all goes well… He will scalp. He will then use the scalps to quite literally ‘top off’ his lovingly restored mannequins.

Then Frank meets Anna, somewhat the artist herself. She wants to use Frank’s mannequins for her new show. More troubling is her willingness to spend time with Frank, to even befriend him. For a hack’n’slasher this is is truly a perplexing development. 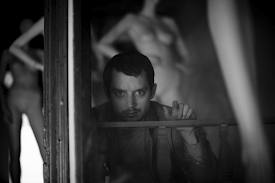 Nope. Not creepy. Not even a little.

Consider Maniac the companion piece to Drive. Both are 80s throwbacks in every sense, from the music, to the deliberate build ups and the gleeful use of unexpected violence. Although with a title like Maniac I guess some violence should be expected. It isn’t called Fluffy bunny after all…

More tellingly though is that both films test your resolve. They almost dare you to enjoy them, and just when you start to get involved they have their anti-hero do another heinous act to shake you once more. They are art and grotesquerie in equal measure, simultaneously alienating both gore hounds and art house aficionados. It should be no small wonder that while both films are admired, the core audience is quite small, limited by the content, the genre and the commitment to having an impact.

Maniac is lurid and suspenseful when it needs to be – which apparently is often. Where most slashers have you anticipating the next kill and hoping it is creative and bloody, the success of Maniac is that you start fervently hoping Frank’s prey will escape. It almost becomes the wildlife documentary where you root for the gazelle, but at the same time know it will not end well for this beautiful creature.

The film utilises a first person camera for lengthy periods, particularly the early stalking sequences. This is effectively unnerving and almost consigns Elijah Wood to supporting cast status, even though his character is clearly the ‘star’ of the show. What it also does is change our role. We are not viewers, nor spectators. Not even interested onlookers. In the case of Maniac, we are witnesses, standing by helpless, mute and wide eyed… Like mannequins really.

Final Rating – 7.5 / 10. A hard watch. This will appeal to fans of horror who appreciate the nuances, those that like some ‘cinema’ with their ‘movie’. One of the best and unfairly overlooked horror flicks in recent years.