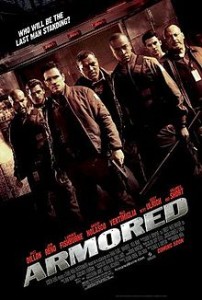 About twenty minutes into Armored I was positive that I’d seen this terrible film before.

Something about a group of hip young underwear models and probable rappers conspiring with Matt Dillon to pull off a heist.

That film was Takers. It sucked too. The difference being it doesn’t suck as much as Armored does.

Both the film and the plot are similarly poorly planned and under-resourced. In this film the crew of an armored car conspire to heist the 42 million in cash aboard, reasoning that so long as they check in every hour no one at head office will be any the wiser – especially since they are hiding in the same deserted warehouse where they filmed a billion other low budget crapfests in recent decades. My first question of many is just how long the drive is that checking in every hour suffices? Does 42 million not warrant GPS? Or a second team?

But it can’t go wrong can it? After all it apparently all happened before. At least in a rumour. Right… Right?

Of course the job goes wrong early and continues wronger. A whistleblower, a hobo and a dopey cop all throw their own spanners into the works before Plan B arrives in the form of large bludgeoning things and much yelling. Dissent and disagreement divides the group and it rapidly becomes every moron for themselves.

Dumb crims. Dumb cops. A dumb plot. Dumb me for not switching off earlier.