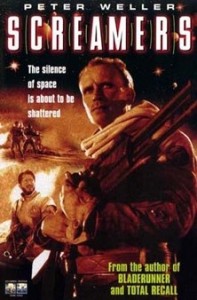 Screamers starts promisingly but fades quickly. Disappointing given early and ultimately unfounded hopes that it might prove a B movie companion to such gems as The First Power and Blind Fury.

On planet Sirius 6B, a mining colony became aware of harmful radiation. Upon reporting concerns up the line to Big Business – they call it NEB here – the response wasn’t even a muffled ‘meh’, but an open declaration of WAR!

With that response I can only wonder how they deal with a request for a pay rise?

Stuck between a rock and an irradiated place the colonists fight back. For ten years. Successfully holding the invaders at bay only after inventing a small robot armed with a circular saw that burrows inexorably and swiftly towards intended victims.

Then one day a stranger approaches the colonist’s outer defence bunker, and after he is sliced and diced like carrots he leaves behind a message suggesting that Big Business want to call an end to conflict.

Is the ceasefire request a trick or the possibility of peace? Joe (Peter Weller) decides to find out for himself. He takes a rookie sharp shooter along for a long trek to the truth, stopping off to visit sets left over from such genre ‘classics’ as Cyborg and Salute of the Jugger.

Joe soon learns that these ‘screamers’ – so called for the high pitch whistle they emit upon charging – are evolving by themselves and bringing new ideas with which to eliminate humankind. Apparently turning themselves into bombs never sprung to mind, that would end things quick.

Weller is wonderfully terse and dry throughout proceedings, acting as if this is the same thing he did last Wednesday. And he wasn’t impressed then either.

The film isn’t so aware of its own shortcomings unfortunately. It is neither cool nor scary, and after the initial screamer kill it is troubling that every subsequent dicing isn’t nearly as effective. Opening with your best bits and nothing to back it up is a sure fire way to guarantee disappointment, akin to the Baha Men opening with Who Let the Dogs Out and wondering why the crowd dissipates shortly after…

Actually in the case of the Baha Men they’d probably dissipate before. Or just not show up.

All is not lost with Screamers, but unlike Blind Fury and The First Power this is not a B movie unfairly relegated to anonymity. This one was lost on purpose.

Final Rating – 6 / 10. With CGI and other advances in effects I’m pretty sure if they remade this today it would be… … … … actually it’d probably just be Riddick.