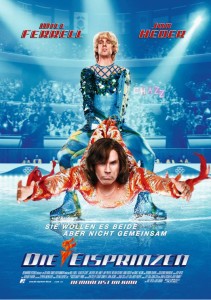 Look at the poster. See the costumes? Recognise the sport? See Will Ferrell?

For better or for worse this is EXACTLY the film that you expect based upon all of the above.

The entire joke is that these two straight guys participate in a stereotypically gay sport, and find themselves in a myriad of awkwardly sexual poses. BUT THEY’RE NOT GAY!

And of course no-one; not the coach, the fans, the rivals, least of all the two guys, acknowledge that it’s far more than vaguely gay. Yet YOU know, savvy and insightful viewer. You know. But it’s up to you as to whether you convert that knowledge into a humorous reaction.

Look. I’m on record as being a Ferrell doubter. He makes lazy, lowest common denominator stuff that panders to the easily pleased. Him and Sandler. But that doesn’t make them not funny. It makes it frustrating that they don’t try to do more with their comedic talents. It took 15 odd years for the general public to realise Sandler never made a film better than Happy Gilmore. So far Ferrell continues to steal money from those with short attention spans and even shorter memories. Blades of Glory might well be his career high point, that still doesn’t mean it’s much more than the middling execution of a formulaic premise.

Final Rating – 6 / 10. Expect no surprises. Expect not to be shocked. Expect… Only the expected.