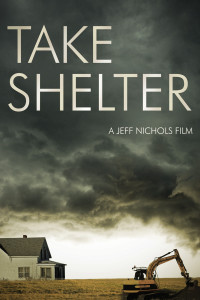 For a while it seems that Curtis (Michael Shannon) falls in the former category. However trepidation about a possible storm brewing leads to nightmares, which develop into powerful urges to make urgent and dramatic changes to the family’s rural home. All witnesses soon realise that it is distinctly possible that Curtis might have developed a case of full blown paranoia.

None of this occurs quickly mind you. The film is a slow burning long road, taking a more organic route to its destination. A route devoid of unnecessary special effects and histrionics. Most of the horror here takes place in the eyes of Curtis as his family, especially loyal and loving wife Sam (Jessica Chastain), a woman who has always known of the mental health issues in Curtis’ bloodline, but obviously never imagined it could emerge with such suddenness and ferocity.

Even Curtis realises that there is every chance he is wasting everyone’s time and causing unnecessary stress to his loved ones. But some decisions aren’t based upon logic, and not every action is borne out of rationalisation and planning. It’s like the OCD sufferer who knows that drawing endless circles is unnecessary, but that isn’t enough to stop them doing it.

Take Shelter doesn’t give its viewers much. It also doesn’t help us take sides. In some films you can find common ground or empathy for what a character might deal with. Here though it is far easier to feel sorry for almost everyone because there are no enemies, hatred or nemeses, unless of course you count mental demons and their nefarious powers.

Michael Shannon is typically solid and believable in a role that could have turned silly fast. If he didn’t believe in his actions, how can we? Similarly Little Miss Everywhere Jessica Chastain is efficient as the helpless wife, frustrated and frightened in equal proportions.

Take Shelter won’t change your life. You probably won’t be recommending it passionately to friends and co-workers, but it carves its own niche as a kind of low key redneck Stir of Echoes / Close Encounters hybrid.

Final Rating – 7 / 10. A neat character study that will either have you guessing or yawning. Perhaps both.