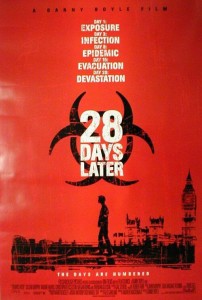 Four weeks pass. Tim (Cillian Murphy) wakes up to the aftermath. Unaffected ‘thanks’ to being in a medically induced coma for many days.

London is strange. Deserted. Signs or prior chaos and disorder are everywhere. Debris. Wreckage. Various damage. Troubling signs, but no bodies.

When ‘life’ does indeed show itself, it’s not as we know it, Tim. It appears that it is one man vs hundreds of former men and women.

It doesn’t stay that way. Others arrive. Some stay for longer than others. Celina (Naomi Harris) tells him “staying alive is as good as it’s going to get” and not to expect for anything more. Not even hope. Frank (Brendan Gleeson) tries to keep the tone light – and he has alcohol – but he worries too about his young daughter Hannah.

Their journey takes them all over London and surrounding areas. A futile search for little more than emptiness and solitude, with every road strewn with rabid and frenzied and – yes, running – undead. One drop of blood imbibed. One friendly nibble. And then… nothing. More sad work for the others who recently called you friend.

The first half of the film is quite good with some memorable moments, a morose and dark road movie with zombified fuel impelling it along. But the whole thing is let down by a crushingly derivative and dull final hour. Despite being hailed as a modern day genre classic I can’t for the life of me see 28 Days Later as anything more than a promising premise with incomplete execution.

And when you consider that the premise is little more than a monkey initiated zombie outbreak, then I guess what I am saying is Danny Boyle came up with a couple good scenes.