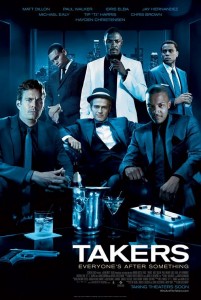 They shine so pretty don’t you agree!

Takers shows us what would happen if the guys from Entourage decided to moonlight as bank robbers – one of the them is actually played by a Dillon brother.

Yep this sure is a smooth crew, they dress well, talk slick and operate like a well oiled machine, only catching up periodically from their separate lives to plot their next photogenically preposterous heist. Then once the next job is done they scatter about the globe to live the life of high rollers and rap-stars – need I even mention two of the crew are played by rap-star / R&B-star types?

All sure is going well for this crew lead by the actually cool Gordon Jennings (Idris Elba), until former crew member Ghost (T.I.) arrives fresh outta the slammer with a suggestion – nay a demand – that the crew accept him back immediately and pull of a new, dangerous job in less than a week in taking down an armoured car in broad daylight. Jennings initially finds this an unpleasant break from regularly scheduled programming, especially as the crew are still basking in the success of the most recent job. He tells one and all that it goes against the intricately planned nature of the normal high yielding jobs, but tempers that by declaring “We are ‘takers’, it’s what we do”.

The bland crew scowl, smile and talk smart as they preen and plan the job, making sure that the camera always shows their best sides. Matt Dillon plays a cop on the trail, as always just a step behind but never close enough to cause the crew stress.

Idris Elba might add genuine credibility to proceedings but the material is not worthy of his efforts. Matt Dillon furrows his brow and tries his best to look concerned and thoughtful, and I think T.I. thought he was exhibiting a lot of deep street cred but came across as merely confused… And memo to Chris Brown and Hayden Christensen; if you are out-acted by Paul Walker perhaps a new vocation might be appropriate.

In fact the 90 minutes that follow the establishing scenes elapse without a single memorable scene, stunt, line of dialogue or character. The only thing I can recall a couple days later is that is was more a travel guide to Los Angeles thanks to the setting than it was a heist movie.

Final Rating – 6 / 10. The only thing that Takers is most guilty of purloining is 2 hours of my time. Here is a wannabe Heat that left me Cold.

I didn’t hate it, but I very much resent the fact that there is nothing to like.