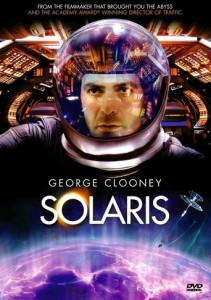 They turned Gravity’s deleted scenes into a spin-off.

Psychiatrist Chris Kelvin (Clooney) is summoned by a mysterious message to a remote and distant space station near the planet Solaris. Upon arrival he is met with blood, bodies and cryptic answers from the remaining crew, the edgy and skittish Snow (Jeremy Davies) and the stoic and tight lipped Gordon (Viola Davis).

Kelvin is eventually told that something on Solaris doesn’t want them to leave, and this force sends representatives familiar and peculiar to the individual crew members to try to convince them to remain.

These representatives take the form of living beings. Beings that hold significance to them. Things they love.

Obviously this is a strange development which for obvious reasons is both amazing and disconcerting for the crew. Not all of the things we love are still around. Even once the existential dilemma passes, questions remain; Can they learn new things? Can we take them back? Do we even need to go back?

I found it odd that with a crew of only three only Kelvin’s ‘muse’ was worthy of discussing. There was a definite missed opportunity for a powerful moment with Gordon a few times that went unutilised.

I see the conundrum in the film. I acknowledge the moral dilemma that is created and how difficult it is to make what may seem an obvious choice. If love isn’t an entirely logical emotion in the first place, then is it any less powerful and valid just because the target of it is no longer there?

The acting in Solaris is fine. Even the plot is ok. There is just some sub genres within sub genres that prove too narrow to find an audience. Solaris might have been George Clooney’s training video for Gravity, only it was always going to be hard yards gaining acclaim with a sci-fi flavoured space romance with lashings of Event Horizon.

I mean if there’s anything females love, it’s space movies with the chance of horror. And surely the guys that embrace space horror must also be hanging out for the chance of timeless romance… Right?

Final Rating – 7 / 10. A film for people who like certain stuff set in places full of stuff that they probably don’t like. In short a film with something for some but not much for most. Doesn’t make it any less good, but you don’t find acclaim and renown by making yourself impossible to be found.