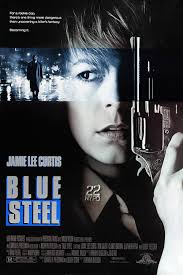 Blue Steel is an atmospheric and brooding version of a film that requires several leaps of illogic to get started, and once set in motion must move inexorably toward the one possible ending.

Rookie New York cop Megan Turner (Jamie Lee Curtis) still has her boot polish wet on her first day on the streets, when she sees a bad guy performing an armed robbery in a convenience store.

Pause: Megan sees the robbery start from across the street. Then crosses the street, uses an alley to gain access to the back of the store, creeps slowly through the aisles, then and only then does she scream “Freeze!” That’s a minimum two or three minutes. Just how long can a bad guy point a gun at a terrified cashier while screaming “give me the money” before either (a) she gives him the money and he flees, or (b) she doesn’t give him the money and he shoots her or flees?

Doesn’t matter. He doesn’t freeze. She fires. He dies.

As the police arrive to take statements from the various staff and patrons and Megan herself, the question arises as to whether the bad guy had a gun or whether Megan fired prematurely without sufficient justification. It gets instantly worse when the perpetrator’s gun cannot be found at the scene.

One guy who did see it all was Eugene (Ron Silver), an onlooker who watched on horrified from the time when the robber started yelling until the moment Megan’s bullets dropped him to the floor. Eugene also took a keepsake, being the gun, and a shine… no make that a fixation, being Megan.

The cops sure don’t remember or care about any of those things. Megan is suspended immediately.

Within days bodies start showing up across New York City, with shell casings left behind that literally have Megan’s name on them. With Megan on suspension and unable to assist with the investigation, not only is she reinstated, but promoted to detective. It pays to be under investigation for wrongful shooting…

Remember Eugene? Yeah well he’s still around and still has a thing for Megan, in fact he manages to convince her that he is a decent enough chap for her to consider dating. Unfortunately for all involved, including Megan and the innocent bystanders in New York, Eugene also has voices in his head that tell him to do things.

By this time we already know how the film will end. With Blue Steel it is just a case of how complicated they can make it before the inevitable face off.

In this case very. Take for example this paraphrased line “well your best friend just got shot in front of you, leaving you as the only murder suspect despite the scads of evidence suggesting otherwise. Why don’t you take tomorrow off?”

I swear this basically happened.

Blue Steel is much more than a tale of a wide eyed cop squaring off against a stark raving homicidal lunatic and repeatedly having the NYPD ignore all evidence and consider her a likely suspect. Actually it isn’t much more than that, maybe just another example of how you would not want the superiors in any movie investigation responsible for your case.