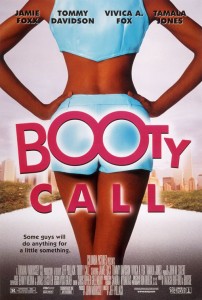 Let me start by saying when you hate the nice guy in a movie about broad cartoonish characters, you’re off to a rough start.

The ‘nice’ guy here is Rushon, who seems the kind if guy to stay on the periphery of a situation muttering the ‘right thing to do’ to myself without ever taking action. The ‘situation’ would quite often have his friend in the middle. This ‘friend’ is Bunz, a never ending stream of wrong with Kriss Kross’s tiny braids, Mike Tyson’s brain, and Lindsay Lohan’s sense of right and wrong.

Bunz don’t be having no time for no girlfriend. He favours the booty call; a late night phone call confirming availability and expecting an invite for consummation. Apparently this works for a guy who would be kicked out of Justin Bieber’s entourage for being too obnoxious.

Amazingly enough Rushon thinks it wise to ask Bunz on a double date, so that his equally nice, equally pointless girlfriend Nicki will be less daunted. She if course brings her own fiercely hateable friend Lysterine (Vivica A. Fox). Wait!… Seriously… Lysterine? That would be a terrible rap name, let alone a real name, and you’d still roll your eyes every time she rapped about her ‘freshness’…

Surely by now the quotation marks should signify just how dubious all of these descriptors are. I tuned out about twenty minutes in when the crass racial stereotypes and boudoir innuendo started overpowering my senses. Let’s just say there’s an Asian guy called Ug Lee and leave it at that shall we?

This is but mistake number 37 of 568. For a start Bunz (I loathe even typing the word) is a one note egotist, constantly spewing dialogue that runs the gamut from offensive to inane, pausing only to demand that he perform celebrity impressions at startling inappropriate moments – in one interminably long and painful scene it is because it turns his partner on…

… Problem number 569 & 570; Bunz and Listerine seem to bond over their clear lack of social graces and ability to speak Cantonese, which Bunz ‘picked up by watching karate movies’. They take this shared knack to openly deride a Chinese man in a restaurant – but don’t worry he’s an openly scuzzy guy too. So that makes it ok.

So far; two bland people,  two Foxes. (One with two xx’s.) No chemistry.

So the joke is that despite both sets of prospective partners being ready willing and able to do the nasty, circumstances continually conspire against them. Usually this is in the form of a lack of protection, something I agree with, because you don’t want these horrible individuals breeding.

The aforementioned racial stereotypes go far beyond just Asian bashing, they get the middle eastern convenience store staff, and of course uptight white people (aren’t we just the worst?).

Then of course the film ends with one of the guys nearly having his testicles surgically removed in a bizarre case of mistaken identity. Nearly lost his balls! Hilarious!

Not really. But then again Jamie Foxx’s entire career seems built on his unshakable self confidence and belief in his own genius. He works the crowds of late night shows with a barrage of average jokes, average songs, average stories and astonishingly forced charisma. I firmly believe that he is only a notch above the similarly evenly untalented Jennifer Lopez, another unfairly famous person.

To Foxx, Booty Call might just be another film he forgot about. I wish I had his selective memory, because this cinematic skidmark will undoubtedly stay with me for some time whether I want it to or not. And count me as a firm ‘not’ on that one. If Jamie Foxx had a shred of self awareness he’d be as embarrassed as hell at this one. Consider me embarrassed for him.