How to Train Your Dragon 2 (Review) 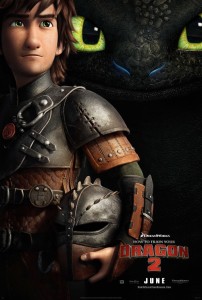 It took three months to watch How to Train Your Dragon 2 after it was released to theatres, a film that I wasn’t especially looking forward to initially. My seven year old changed that.

With a family movie pass gifted to us and the anticipation of a free movie ahead of us, we (foolishly) granted the boy the authority to pick any film he wanted to watch. Mr Peabody and Sherman. Smurfs 2. Other DVDs of kiddie films I watch with eyes glazed over. Teenage Mutant Ninja Fucking Turtles.

All the while I know that HtTyD2 was either coming or here. All the while knowing it got good reviews. All the while my not caring grew to wishing we were watching this instead of Smurfs, turtles and such…

So perhaps it is because I permitted my expectations to grow through anticipation, that I find myself mildly disappointed that this is all so predictable…

Hiccup (Jay Baruchel) is a little older and more mature. Not so much so that he feels ready when dad Stoic (Gerard Butler) informs him that is ready to be groomed for leadership of the village of Burke, a sumptuous coastal development which has now seamlessly integrated dragons into the community.

But there are more ominous dealings afoot. Being able to pilot dragons gives an increasing scope for adventure. It is on one of these travels that Hiccup encounters the threatening advance scouts for Drago (Djimon Honsou) and his famed Dragon army.

Stoic demands that the peace loving village prepare for war. Hiccup wants the peace maintained. He wonders if the mysterious masked dragon rider that he meets in the clouds holds the key to further advances in human/fantasy creature relations.

For all the talk and adulation How to Train 2 is amazingly formulaic and predictable. Good guys want good stuff. Bad guys wants bad stuff and seem better equipped to enforce their flawed way of thinking. Good guys overcome bad guys using strength of will and teach everyone a valuable lesson.

Sure the view is magnificent. It happens with every big budget animated film but once again the animation is spectacular and the vistas especially sumptuous. The film is beautiful, the characters well crafted and the message important, but I wonder if I’ve seen this before.

Final Rating – 7.5 / 10. Just as good as the first film, maybe better, but not the ground-breaking delight the critics would have you believe.