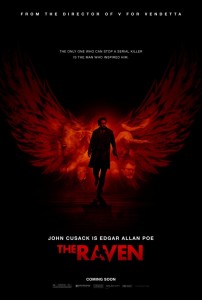 The Raven gives a stylish and steadfastly dark portrayal of the possible last days of Edgar Allen Poe, the legendary author of many similarly dark and stylish masterpieces in literature.

An arrogant man drunk on his own genius and full of self righteous indignation, Poe (John Cusack) is also broke, uninspired and drunk on other, more standard sources.

With a crippling case of writer’s block and a growing resentment at the fact that other lesser writers are finding more acceptance from the public than he. Forced into penning articles for the local newspaper, Poe finds that even his editors don’t find his prose worthy of the front pages any more.

With all crumbling, Poe is placing all of his hopes in the arms of his well to do sweetheart Emily Hamilton (Alice Eve), whose wealthy and powerful father (Brendan Gleeson) is forcing their love into the shadows for fear of discovery and reprisals.

Then a turn for the dramatic. When a series of grisly murders show all the hallmarks of Poe’s writings, he becomes both an adviser and a potential suspect to the police. Then the unknown copycat killer takes Emily, and Poe becomes even more entangled in proceedings.

Should he follow his own clues? Is this merely a fanciful game? Is Poe in fact losing his mind?

All of this and more are explained in The Raven, but it is merely a whodunit with more ruffles and more syllables. Like From Hell, which reimagined the Jack the Ripper tale, The Raven fills it own backstory for Edgar Allen Poe, only it’s a fanciful version of a period that no-one was crying out for.

With subject matter that will scare off the younger audience, and bloody violence to deter the older viewers, The Raven was doomed before it started. It has a couple of moments that make it momentarily interesting, but not enough to warrant you hunting it down.