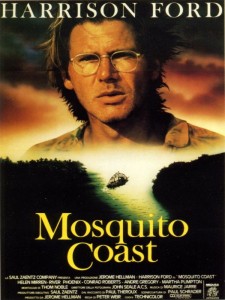 The Mosquito Coast tells the fictional story of Jerry Fox and his unfortunate family. A pretentious anti-US but somehow pro-American doomsday crackpot with just enough brains to think himself genius but not near enough common sense to do what’s best for him and his family.

For Fox the glass is not half full or even half empty. It is unfit to hold water. And the water here sucks anyway… Ever prattling and relentlessly condescending, Fox over-thinks things to the point that he decides a new life on the remote South American coast is a solid option, despite his three young children and increasingly reluctant wife.

Fox is an especially unlikable character. If you’re not with him you’re wrong. No matter how you are or how loyal you have been previously. Ford pulls no punches and doesn’t bother trying to provide him with redemptive qualities, almost to the point where Fox is cartoonishly one note. This might prove a recipe for a strong performance, but it makes The Mosquito Coast especially hard to embrace as a film.

Despite the almost admirable aim of co-existing in their new locale, and not to convert, conquer or heal, the Fox’s find that even the purest goals can be tainted by the will and contrasting goals of others. It seems that no fledgling society, no matter how well planned, well intentioned and smugly self absorbed, can rise without issues.

Like the character of Fox The Mosquito Coast may ultimately be well intentioned, but it is similarly hard to appreciate, and even harder to enjoy.

Final Rating – 6 / 10. Character studies about unlikable characters. I don’t get them. I usually don’t like them. That proves the case here.