Let’s just say that when imdb puts together their ‘if you liked this film then you should like…’ for these films, the list should simply say ‘…anything’. 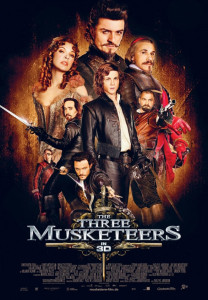 I think I speak for the world when I say we are tired of the Resident Evil franchise, even if the box-office doesn’t agree.

So when director Paul W.S. Anderson introduced his already played out formula to a kid’s story no-one really cares about any more, was it ever going to be a surprise that when it didn’t work?

But logic never seems to be front of mind where Mr Jovovich is concerned, so ladies and gents I suggest you brace yourself for The Three Slo-Mo-sketeers

End all corr-up-tion in France

Scads dead. Not a drop of blood

As with all Anderson films there is never character development or evolving, just ‘here’s the bad guy, and over there’s the good guy… in slo-mo’. In place of these unnecessary elements are the usual booby-trapped corridors, bizarre and incomprehensible missions and of course the ever so untalented and undeserving Milla Jovovich proving that bad actors can always get work (as long as they are banging the director).

This arrived and sank without a trace – even though it was in 3D! The reason being that The Three Musketeers is bad even for a Paul W.S. Anderson film. 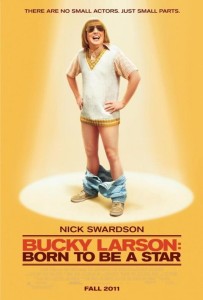 Bucky Larson: Born to be a Star

Comedians must come through the sifter before they can be discovered. For every Ferrell, Sandler, Carrey type there are a dozen Tim Meadows. Guys that might be likable and talented, but they just never find the right role or catch the right eye. Zoolander had a cast with numerous sorta recognisable actors, only Owen Wilson, Ben Stiller and Will Ferrell got noticed. American Pie made bazillions, but only Sean William Scott managed to carve out even a semblance of a career.

In recent years Hollywood has realised that lazy fluid heavy comedies are cheap and probably profitable. So they throw a bunch of wannabes together and see if anyone falls out.

Jason Segel was an Apatow afterthought in a couple early films, then he became a leading man with Forgetting Sarah Marshall and he is now a bona fide leading man. Ditto Seth Rogen. Danny McBride gained renown in a few smaller roles and now he is out there making Ferrell-esque unfunny films of his own.

… Let me save Hollywood a few years. HE DOESN’T.

I tried to laugh the first time Kevin Nealon’s abrasive character denigrated Bucky for no good reason, before quickly realising that it wasn’t actually funny, only slightly less unfunny than everything around it. 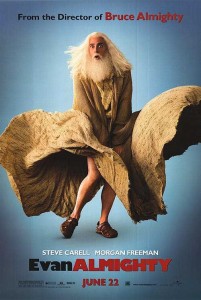 Bruce Almighty was a passable comedy that took advantage of the last days of Jim Carrey’s declining comedic talents. While a sequel was inevitable, the fact that Jim Carrey refused all involvement seemed to stymie the chances of this ever eventuated. The fate stepped in (which if you’ve seen the film seems apt). Steve Carell had a bit part in the first film as Jim’s rival reporter. In between that film and this, Carell saw his own star rise thanks to a series of comedies beginning with The 40 Year Old Virgin. Exit Jim. Enter Steve. Will the laughs stay?

All think E-van is totes nuts

Then the beard grows. And beasts show

Always a sure fire sign of a dead in the water comedy when the post credits sequences are funnier than the film itself. That isn’t the case here, they suck too. All that remains is a desperately unfunny film that wastes the talents of Morgan Freeman, Carrell and John Goodman (who never seems to say no to anything these days).

It does actually use Jonah Hill to his full potential though as a pointless toadying yes man staffer and extraneous hanger on. Aside form animal flatulence and the astonished expressions of onlookers, the one joke seems to be that Evan grows a beard real fast. There are many comedies that just aren’t funny, fewer are as painful to watch as this one.

Final Rating – 3.5 / 10. The most aggravating mainstream comedy in years. By striving not to piss off the church, Evan Almighty guarantees that it will please no one.

Ugh. So many millions. So little entertainment.