For all of those among us who live in perpetual fear that the snowman in your yard will come to life to horrify and paralyse us with fear, here is not one but two films that prove beyond reasonable doubt that this is not possible.

In fact not only does the Calvin and Hobbes cartoon consider the exact premise to much greater comedic effect in the Attack of the Snow-Goons compendium, it’s probably a great deal scarier than this could ever be. 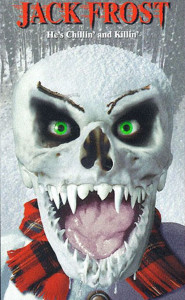 When renowned serial killer (and apparently inferior Bruce Campbell impressionist) Jack Frost meets his death, liquefied in the snow and mud, no one anticipated his return. Especially not his capturer Sam, the mild mannered and low key chief of the Snomonton police force – a town whose claim to fame should he ‘fakest snow in America’ upon evidence on display in every scene from here.

But return Frost does, like a bad penny and unwanted Transformers sequels. With the budget of the former and the entertainment value of the latter, this is hard going indeed.

Frosty does indeed take the form of a snowman, though nothing like the vaguely frightening figure on the poster. This snowman is the more stereotypical big round head and slit mouth – where the lips don’t move even on the few regrettable occasions that he chooses to deliver his awful snow related puns.

In the first half of the film Jack’s ‘terrifying acts’ are comprised of appearing behind an awful actor and not moving, before the awful actor feigns terror – badly – and clumsy and disconcerting camera movements and noises strive to give the appearance of movement… And a pulse.

But it gets worse. White oven mitts stand in for Jack’s arms – since when do snowmen have arms? – and to compensate for lack of leg speed – and lack of legs – we learn Jack can melt and reform on command like the world’s most seasonally effected t1000. And that he can form icicles and propel them through the air toward victims.

Yes it is all that terrible. And worse. Here’s a movie that could be five times better and still not call itself B.

Shannon Elizabeth appears as one victim and can’t even enliven proceedings with meaningful nudity. Actually nothing helps this film. Snowmen aren’t scary. Let’s see if Jack Frost 2 proves me wrong.

Final Rating – 5 / 10. So many fondly remembered 80s and 90s horror movies suck. This makes many of them look Oscar worthy. 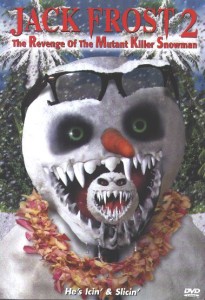 With JF 1 being such an abject failure on every conceivable level the biggest surprise in Part 2 is not that it is mildly superior, but that it even exists at all.

Kudos I guess for the realisation that the rotting corpse of the first film could not be reanimated, so Jack Frost 2 takes place on a lovely tropical island… Where you might ordinarily think snow is in short supply.

Sheriff Sam is back, the laughing stock of his home town thanks to his allegations of wholesale slaughter perpetuated by a seasonal front yard ornament. He and his wife and a couple friends are attempting to put some space between themselves and the mockers by taking a long Christmas holiday.

Only Jack is unexpectedly re-embodied, initially as a small red carrot(!), and with the arrival of Jack the time nears for the departure of care, logic and entertainment, the three wise inclusions of horror comedy.

There are actually traces of thought in this film. The filmmakers sensibly realised that trying to remake one of the crappiest films in a millennia might be a misguided venture, so they try to copy other low budget shitty horror flicks. The kill scenes are less terrible but still instantly forgettable. Everyone overacts so awfully that you’d swear a prize was to be awarded for the hamminess performance, and there is some actual unnecessary nudity.
All brought to you by the Japanese beer Asahi, which somehow manages to be front and centre in half the scenes in the film.

Of course it’s still a film about a killer snowman. But in trying – and failing – to ramp up everything that made the first a slightly silly DOA mess, they have managed to show up that film as the piece of spam that it is.

So congratulations on making a film that sucks a tiny bit less. I’d still walk a hundred miles barefoot in the snow to avoid it though. 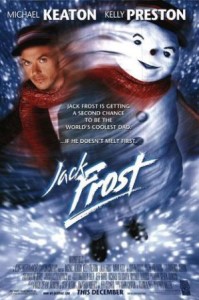 Oh you haven’t heard of it? Well here’s why in ninety seconds;

Jack Frost (Michael Keaton) is the lead singer of a band tiptoeing the line of success. The ‘biggest Colorado band no-one’s heard of’ they say. A big break is inevitable. Everyone knows it.

Then a showcase is offered with all the record label decision makers in attendance. On Christmas Eve.

Despite having the closest thing to a perfect dad, Jack’s son Charlie resents the decision to choose a potential star making turn over his own ice hockey game…

(…actually who would schedule a big showcase gig on Christmas Eve anyway?)

Doesn’t matter who, Jack’s car skids on icy roads and he never makes it to the gig or the game. As a matter of fact he’s dead. Some kid’s movie huh?

So I hope you feel good about yourself Charlie!

Actually he doesn’t feel that great. But no matter, apparently karma has a name recognition app, and Lo and behold Jack is reincarnated as a crappily CGI’d snowman who appears only to Charlie, to whom he can impart wisdom. Like maybe “turn into the skid” or “snow tires area good investment” maybe.

Jack yaks to Charlie every few minutes, has the obligatory snowball fight and freaks out the local bus driver played by Henry Rollins a couple times. I was amazed that he didn’t appear onstage at the ‘big reunion gig’ that I feared would arrive in the last 30 minutes. I was amazed that he didn’t show up at the ice hockey game with a wig and assist Charlie to the winning goal.

I was genuinely amazed at how bland and pointless it all was. I mean why bother getting Michael Keaton and Kelly Preston as his wife if you’re only going to conjure up this slushy drivel?

Final Rating – 5 / 10. There’s many reasons no-one has heard of this, the one you need to focus on is that it sucks. 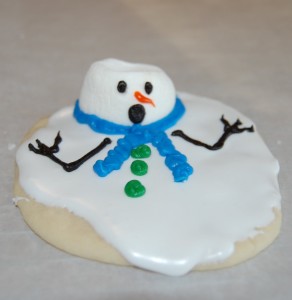 While I try to throw a joke or two into proceedings when I can all of the opinions presented in my reviews are genuine. I don't expect that all will agree with my thoughts at all times nor would it be any fun if you did, so don't be shy in telling me where you think I went wrong... and hopefully if you think I got it right for once. Don't be shy, half the fun is in the conversation after the movie.
View all posts by OGR →
This entry was posted in Crappy Movies, Film, Movie Marathons, Movie Reviews, The 7th Level of Suck. Bookmark the permalink.