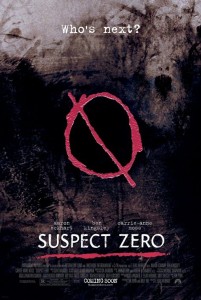 Suspect Zero shouldn’t work and very nearly doesn’t. It takes a scarily plausible idea then makes the mistake of – or dares to – depending on your viewpoint, by wrapping a scarily implausible idea around it and letting them duel it out so that ultimately it is up to your personal acceptance of difficult concepts that will decide your opinion.

To smooth over some of the more logical leaps required the film throws a million red herrings at you, with so many contradictory statements bandied about that merely keeping up with what may or may not be reality is a challenge in itself.

One of the two central concepts I will leave alone, the other though is quite Dexter-esque, with the idea being that a serial killer is hunting other serial killers, using his own experience of the inner workings of such a person to identify, track and confront his prey.

It takes a while for fallen FBI agent Tom Mackelway (Aaron Eckhart) to realise this fact, and to be fair he is handed some giant clues on silver platters by Benjamin O’Ryan (Ben Kingsley), a man whose true nature vacillates throughout the film, but regardless of what he is really about he is definitely an intense and complex guy.

Mackelway spends the film trying to make sense of the situation, taking advantage of the occasional hints and clues thrown his way, many addressed directly to him. With his ex Fran (Carrie-Ann Moss) assigned to the case to provide assistance (and cinematic friction), he eventually theorises that the most dangerous serial killer might be one with no standard mode of operation and no home base.

Meanwhile the bodies pile up knee deep as Ben Kingsley does his best Hannibal Lecter impersonation across the United States.

It is the performances of both Kingsley and Eckhart that hold the film together, with Eckhart playing the necessary straight man to Kingsley’s scarily intense scene stealing. Frankly I couldn’t work out why the character of Fran was needed aside from giving Tom someone to discuss the case with, and in a lean 90 minute serial killer flick it might be a bad sign having a character who may as well be named Fran Filler.

But the prospect of earnest hunter meeting deadly prey keeps us watching, and Kingsley’s gonzo scenery chewing keeps us wondering what might happen next.

Suspect Zero might not have much staying power, but for those who like the CSIs and Criminal Minds that clog weeknight viewing, consider this something of a double ep with all new guest stars and you won’t be disappointed.

Final Rating – 7 / 10. Another of those single hook thrillers that appear and disappear just as quickly. At least this one is well made, well acted and doesn’t outstay its welcome.