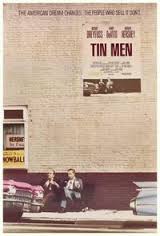 Tin Men reminds me so much of Changing Lanes. Both are films that start with a minor car accident, and while they each head off in differing directions from that point,  at the core both are films about competitive guys trying to one up each other.

Extremely unlikable, vile and unpalatable characters playing childish yet high stakes games of ‘back at ya!’

In this case the two gents both happen to be aluminum salesmen in the 50s, aluminum being seen at the time as a more weatherproof, aesthetically pleasing and just better alternative to wooden panels on homes in America.

That is if you believe the shtick of Ernest Tilley (Danny De Vito) and BB (Richard Dreyfuss), two ‘tin men’, who alongside their similarly ruthless cronies set to using every trick in the book to convince honest and often innocent rubes that their homes would look better if they resembled a can of Spam.

BB is unparalleled in his field, his sales patter effortless and malleable, he circles his prey verbally looking for an opportunity, toying with them before finding the weak spot and closing the deal. Tilley on the other hand is riding a lengthy slump and living off loans from his boss.

After the initial bingle these two men from rival companies continue running into each other for the duration of the film, taking every chance to screw the other over. It starts mostly with vehicular mischief, a broken side mirror here, a few smashed windows there, but as it rapidly escalates beyond car damage the full extent of the duo’s douchery is made very unpleasantly evident.

In the middle of this all is Tilley’s long suffering but faithful wife Nora (Barbara Hershey), a nice unassuming woman who manages to find herself a pawn in a chess game between scumbags.

With a dearth of humour and two genuinely meritless combatants I failed to find the entertainment value. Had they opted to keep the stakes low the film could have remained light and even benefitted from a little slapstick.

Alas they went the high stakes route, and like other hypothetical battles on paper between reprehensible characters (Kanye vs 50 Cent. Paris Hilton vs Amanda Bynes. Paula Deen vs anybody) there can be no winners. Only losers.

Final Rating – 5 / 10. Like another more famous and meritorious Tin Man, these two guys – and the film in which they exist – have no heart.