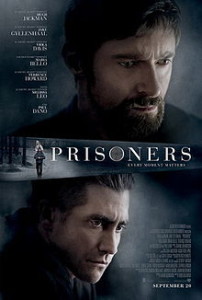 It should be a little depressing that most crimes are solved well after the event and only when the perpetrator fucks up. If the criminal covers their tracks and holds their nerve, all too often they get away. The very good Korean film Memories of Murder showed that even the most diligent policework can sometimes lead nowhere, and that luck and simply ‘being around’ is often more important.

But people in small communities can be different. They march to the beat of their own drum.

Members of the Dover and Birch (sounds like a law firm) families don’t believe in luck or being around. Not when they each have the misfortune of having a young daughter taken from their very neighbourhood while they are celebrating Thanksgiving indoors.

And when Alex Jones (Paul Dano), a bespectacled, introverted and learning impaired young man is found in an RV that was described as being nearby at the time of the abduction, they demand that he ‘fess up and tell them where their little girls are. But Alex doesn’t fess up, and with a lack of evidence the police are forced to release him to the care of his foster mum.

The small town with many secrets vibe will be familiar to those who loved Silence of the Lambs, but this is far less hooky than that particular film. It will no doubt polarise many with the blunt nature of the actions taken, and it perhaps takes a step beyond the plausible as it nears its conclusion. But rest assured, Prisoners ironically takes none. It is a powerful and compelling character study with infinite twists and turns that may have you at times empathising and at others aghast at what some people are willing to do for family.

From memory Prisoners found its way to a few year’s end Best of lists. I think the subject matter might have turned some away. Indeed, there are leaps of logic required (retrospective thought will have you wondering why things weren’t apparent to some characters sooner), but the leaps are ultimately worth the two and half hours required for investment in the film.

Other films might have gained more box office and more kudos in the media, I think Prisoners will be one of the films referenced in a decade or more. This is a sleeper that more should wake up to.

Final Rating – 7.5 / 10. An all too rare ‘adult drama’ that’s also entertaining and compelling.