Nico: Above the Law (Review) 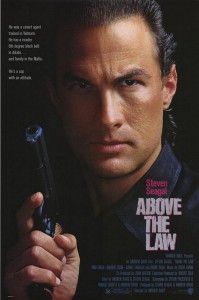 “So lady you work for me huh? You know the drill…”

In honour of the recent news regarding one Mr Steven Seagal’s employee hiring policy, I decided to revisit one of his best. Admittedly he only has a few real good ones.

Stevie is Nico, a half bald, half mulletted pre-ponytail guy with an eyebrow you could rest a coffee cup on and pitch black eyes. Nico was once a good soldier in Nam who deserted after some naughty CIA dudes held an interrogation that he felt got out of hand. He is also a martial arts master and as I later discovered, totally runs like a big girl.

Back in tha worl’. Nico makes what might then have been an OK move in marrying Sharon Stone and popping out a kid, he is now a cop and his partner is Jackson (Pam Grier), who hopefully is a better cop than Grier is an actress.

Nico loves two things, his family and tank tops, and hates only crime. After rousting a bar one day to find his mischievous niece who was seduced by the dark side Nico gets a big tip that a big deal is going down, the cops plan a way to make a bust. Of course the sting goes sour when the CIA get involved, but don’t worry kids ol’ Nico will get it right! Once he fixes things though, the CIA let his guys off anyway and they are freed to blow up the very church Nico and fam frequents.  You know shit’s going to blaze up now! The CIA pull some strings and Nico is incorrectly framed for a crime he did not commit. No longer an active cop, Nico goes off the grid to get the info he needs while Jackson does some research for him.

We know where this is headed, don’t we? Apparently 5 guys with machine guns aren’t enough to get Nico, even when they have the drop on him, and Nico obviously trained at the “1 assailant at a time” dojo, as in each fight the background guys wait patiently for their turn to flail aimlessly and get smacked in the back of the head.

This is far less violent than I remembered, but then I did first watch it when I was in my teens. But I distinctly recall more snapping of limbs than I witnessed last night, I am positive there must be an unrated or R rated version running around that I missed. I mean what’s the point of watching a violent action film without the violence?

This film also wins the award for using the word “Motherfucker” more than any other non-urban film I can remember… And when I say non-urban, I mean a film without many black guys in it.