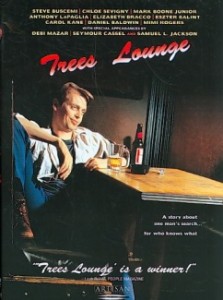 The hardest part of being the designated skipper on a big night out is remaining sober while watching your mates get stuck in and enjoy themselves. It would be countless times harder staying silent on the periphery while they got drunk and acted boorishly and did and said things that no sane minded person would ever dare.

Trees Lounge is the kind of establishment filled with guys and gals who constantly opt for the latter behaviours.

Steve Buscemi didn’t take the easy way out when he decided to write and direct his first film. Maybe he wanted to remain out of the spotlight, but it’s hard to see how he was ever going to ‘sell’ a film set in a bar populated with hopeless drunks – not the funny Cheers kind… not even the ‘should be reprehensible’ Barney from the Simpsons kind.

Tommy (Buscemi) is one such barfly. His longtime partner is happily shacked up with a man who was once his friend, and she is pregnant to boot with a child that could very well be his. He has no job, no drive and at this stage no intention of doing anything other than drinking himself stupid in the bar below the dingy room that serves as his ‘home’.

The Trees Lounge is a local dive. It is dank, sweaty, gloomy and depressing, and home to several regulars like Tommy. When the ‘Trees’ is open, they’re drinking. When it’s not, they’re waiting desperately for opening time. And drinking as they wait.

It seems that Tommy is one of the more recent arrivals at the Trees. He had a job, a girl and probably prospects at some stage. His family and friends live in the same town and he eventually finds a job driving the local ice cream truck, but even this only brings more issues when his friend’s teenage daughter starts keeping him company on his route.

Being a habitual drunk is obviously not many people’s first career choice, and while we learn just how many of the sad faced regulars came to be in their predicament, there is precious little in the way of redemption or lessons learned in Trees Lounge – the film and the bar. For the most part it is inane chat that invariably leads to conflict or argument, and a protracted series of painfully drawn out bad decisions that leave the viewer saying “oh don’t” frequently.

The acting is uniformly good in this film, which doesn’t shy away from the harsh reality that alcoholism brings with it. Having pointed that out it should come as no surprise that Trees Lounge is not a happy and uplifting film. Sure it isn’t ‘Naked’ depressing, but existing in the tier above that film is hardly cause for cheer.

Final Rating – 7 / 10. With Trees Lounge, Steve Buscemi proves that he has an eye for characters and a knack for directing, but he is yet to prove that he can bring a smile to your face.