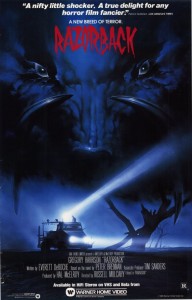 In the uncompromising and uninviting Australian outback, where the temperatures regularly hit 40 degrees (that’s 100 and something to those in the Northern hemisphere), water is scarce and the burnt orange dust seems to blend into the horizon, there are already many ways to die.

Razorback adds one more, and it seeks to cut a swathe of bacon flavoured terror through the cork hatted, strine talking population of ‘Straya’s red centre.

Being an early 80s – and therefore non CGI assisted – affair, we don’t really get to see old Oinky much, although in the opening scene he gets to build up a head of steam and tear straight through a weatherboard and corrugated iron house, leaving it in flames and soon to burn to the ground. Apparently though despite the headlong nature of the assault, the pig had just enough time to snatch a baby from the wreckage for some after-assault snackin’, leading to Azaria Chamberlain like repercussions for the babysitting grandpa. 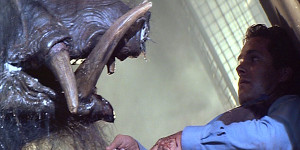 Paltrow’s first role was a cameo.

But for long stretches Razorback is a pig free zone, focusing instead on the eccentric nature of many of the locals, and the many difficulties they present to an animal loving American female reporter and her fiancé who follows her.

In short, all of the locals are as mad as a cut snake, with most of them posing more of a threat than any wild boar, regardless of how big and hairy it is.

Nonetheless it’s still refreshing – and amusing – when the giant razorback is finally unleashed late in the piece, looking as if he was just ripped from the wall mount in some close ups, though other wide shots showing the pig in all of his (I assume motion captured model) glory are very effective.

Razorback is hopelessly dated and shows an Australia that seems further and further removed from reality. God I hope so anyway. But it boasts a unique charm, and deserves it’s place among the 80s creature features like Alligator, Piranha and the like.