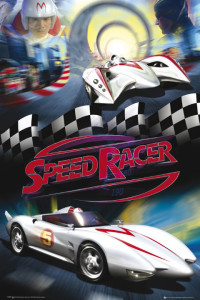 The film opens with psychedelic colours and furious unbridled energy – actually both of those things remain pretty constant for the duration. We meet young ‘Speed Racer’ (Emile Hirsch) as he gazes on in wonder at his older brother ‘Rex Racer’ the best and most famous of all racers.

Speed idolises Rex and is obsessed with motor racing. Well his name is Speed after all. When Rex is killed in an unfortunate racing incident that also sees the Racer name dragged into ignominy, Speed only becomes more determined to restore the Racer name to glory, by winning it all.

Except with facing a billion dollar business and the Racer team consisting of only the Racer family and one mechanic, and a monkey, Speed might not even gain entry into the main competition.

Then the boss of the biggest team arrives with a proposition…

Sure the film has John Goodman and Susan Sarandon as Speed’s parents and Christina Ricci as his girl, but with a script as leaden as this they were never going to rise above this material.

Which brings me to my main point. Why spend 200 million dollars remaking a cheap Saturday morning cartoon, when the former will always be more endearing and just as memorable? Seems like a waste of a lot of money to me. Like paying $500 for a value meal, it might be fleetingly enjoyable, but its still no good for you, and way too overpriced.

Final Rating – 5.5 / 10. The more time that elapses, the further away The Matrix seems to be for the Wachowskis.