Bullet to the Head (Review) 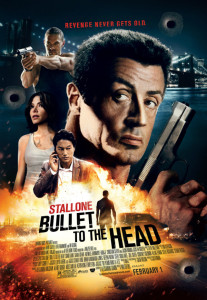 Gee what a backhander of a tagline.

Walter Hill made The Warriors.

Walter Hill made 48 Hours and Another 48 Hours. Though I could have saved time by saying he made 48 Hours twice a few years apart…

Walter Hill did not make Bullet to the Head. He couldn’t have. I mean it has many of his traits and exhibits his love of violence and empty machismo dialogue. But this is the work of a doppelgänger. A stand in. A pseudo Walter Hill.

Let’s start with the dialogue, which sounds like it was first written in a foreign language for a video game. Then it was run through a cheap – and inaccurate – translation program and transferred verbatim to the script for the two leads – neither of whom have English as a first language – to butcher for 90 minutes.

As a result hitman Jimmy (Sly Stallone) and policeman Taylor Kwon (Sung Kang) come out looking like Vincent and Jules as written by Honey Boo-Boo.

They don’t start out as partners. It takes a few unsubtle stabs in a crowded redneck bar before Jimmy is unceremoniously left running solo. Why he accepts help from Kwon I can’t explain, neither can I explain exactly why they need each other. They really don’t. They’re hardly a formidable unit made stronger through combining forces. They keep pointing guns at each other. And Jimmy keeps delivering thinly veiled (but openly stupid) racist comments at his partner.

Characterisation is kept simple. Jimmy likes Bullet bourbon. Kwon likes his mobile phone. Both traits are highlighted early and emphasised. Then never mentioned again. They fare better though than the bad guy here who is lifted straight out of the pages of McBain, only without the laughs.

Nonetheless they follow the trail all the way up the line one kill at a time – pausing only to consider Jimmy’s naked daughter – all the way until the finale, where Jimmy gets to take on an emotionless killer played by Jason Momoa.

Their investigation lays open a cover up attempt that leaves behind bodies strewn over the city. Jimmy and Kwon never miss. Neither does Momoa’s automaton.

Christian Slater appears as both a crooked lawyer and the only character in this film with a personality. Sly mumbles and takes his shirt off for the photo that did more to market this film than any trailer (the pills he will be given each morning in the nursing home will be steroids), and Sung Kang has turned his nil discernible skills into a leading role in a film that will be forgotten within weeks.

Bullet to the Head has a couple of decent action milliseconds but not nearly enough to justify its existence. It is confusing and clumsy even for an action film, and could well serve as the unfortunate full stop to Walter Hill’s – or his evil clone’s – respectable career.

While I try to throw a joke or two into proceedings when I can all of the opinions presented in my reviews are genuine. I don't expect that all will agree with my thoughts at all times nor would it be any fun if you did, so don't be shy in telling me where you think I went wrong... and hopefully if you think I got it right for once. Don't be shy, half the fun is in the conversation after the movie.
View all posts by OGR →
This entry was posted in Film, Movie Reviews, Sly Stallone, Superstars, The Grey Area. Bookmark the permalink.