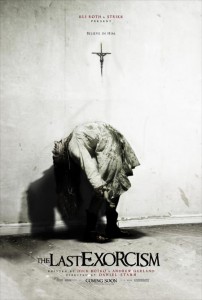 Making a mockery of the naughty corner.

Another year, another “kid possessed by a demon” flick. This one’s a pretty good one though, but unfortunately all momentum and credibility built over a mostly suspenseful, slightly tedious first hour is shot down by a ludicrous finale – the exact same finale from the 2007 Hilary Swank yawnfest The Reaping by the way.

A pity, because even though The Last Exorcism never threatened to hit any great heights it was humming along quite nicely for a while.

Cotton Marcus is the latest in a long line of Preachers from the Marcus family, receiving the baton from his own Father at the tender age of 10. As a result of starting so young he now questions if he ever really believed in what he was doing – or if he simply does it because he always did.

Part of the family game is performing exorcisms, Cotton’s Dad claims to have performed “over 150” himself, and Cotton receives almost constant requests from various people asking him to exorcise something or other from someone or other.

There is a documentary crew of two following Cotton around. Why? Because Cotton is finally ready to open up that he doesn’t actually believe in his own role, and is ready to open up and show the people exactly how he manages to pull the wool over the eyes of the blindly faithful.

And so by random chance Cotton picks a letter of request for his one final job (hence the title) in New Orleans before hanging up the cross for good.

In New Orleans Cotton meets Louis and his two children Caleb… and Nell. Caleb seems the protective older brother, resentful of any external interference and intensely protective of his sister, who is apparently the Regan in this process. Nell is about 16, obviously extremely naïve, innocent and sheltered by her Father Louis.

Nell apparently has been sleepwalking at nights, killing the livestock in vicious fashion and awakening with no recollection of her nocturnal activities. It seems Nell is not denying that she may be possessed, she simply isn’t aware at the time of what she is doing.

Her father Louis is an intense man, extremely devout and protective. With his wife having passed on from cancer some years prior, he keeps a vigilant eye on his kids, especially Nell, home schooling them to keep them away from temptation – and whatever other evils that are supposed to befall every other teenage kid. 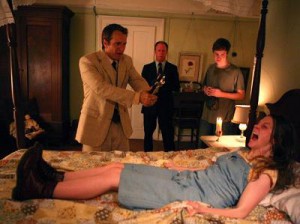 “If I cast the Demon out will you turn off the Amy Grant CD?”

Cotton feels that he can remedy the situation by performing a placebo-exorcism. He believes that if he is convincing enough that all involved will be find peace of mind and move on with their lives. So he puts on a well-rehearsed show, (obviously one that he has performed many, many times before), complete with sound effects, theatrics, a smoking cross and a James Brown move!“I can’t do this any longer! No, wait. YES I CAN!”

Louis and Nell seems momentarily appeased, and Cotton and the doco crew head back to a nearby motel, full of satisfaction for a smoke and mirrors job well done. Then in the middle of that very night Nell shows up in Cotton’s motel room, unannounced and emotionless. Her face blank even as Cotton and the crew attempt to rouse or discover how/why she found them. After taking her to the hospital and contacting her father Cotton realises that perhaps he is a little out of his depth and that perhaps the smoke and mirrors thing isn’t getting it done this time. He recommends that Nell undergo extensive psychiatric testing, Louis shows and says not on my watch.

So back to the farmhouse they go. And this is where the fun really starts…There are hardly any “boo” scares in The Last Exorcism, although the film moves forward the pace is reasonably languid until the last sequence when things really heat up… unfortunately for the film. The first hour though is quite suspenseful, with much of the building tension being derived from the sense of impending action rather than the action itself. There are some foreboding omens, some more dead animals and a bit of jail-bait nude work, but no scares – not even in the Paranormal Activity vein.

It is like a house with 100 doors and behind one door there is a monster. Every time you open a door you know there is a 99% chance nothing will happen, but that 1% sure does keep you on your toes, especially once you are through 50 or so and the odds start increasing swiftly.

The problem with The Last Exorcism is that the last door opens up to reveal a monster that is preposterous, derivative and frankly dumb, totally at odds with the painstaking build up of credibility that the first hour created. I have heard that this justified as “well at least you won’t see it coming” and I admit freely I did not. Yep, I sure didn’t see 80% of a pretty good horror film devolving into a messy circus that blew all the kudos that the film had earned. Didn’t see it at all… no, wait.

Except when I saw it last time it was called The Reaping, granted a (by far) worse film than The Last Exorcism but with an ending eerily similar, if not exactly the same if my memory serves.

All the actors do a job that is better than required in what is essentially is a cookie-cutter exorcism film. Cotton is quite believable as a man who while he might doubt that he has the faith required to be a preacher, is still at heart a well-meaning man. Louis plays the concerned father well and Nell is convincingly normal and nuts when the script requires – and especially bendy too.

This is basically what happens when Rec:, Blair Witch and Paranormal Activity are thrown into a blender, only some big-wig decides to tack on a preposterous ending.

Final Rating – 7.5 / 10. I’m going to ignore the sloppy ending and rank the first hour or so. If you like horror you should enjoy that and it’s up to you to decide if the ending is inspired – or inspiring of disdain.

Put another way: I’d rather watch The Last Exorcism – crappy ending and all, than the next five “Pretty teens get picked off one by one” films.

(I have a theory too on the ending faked Vs legit if anyone is interested. It involves mucho spoilers though obviously.)