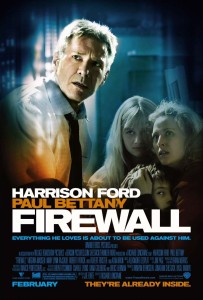 Firewall sees Harrison Ford sleepwalk through most of the hundred and too many minutes with a stunned expression on his face, before awakening just in time to spit out his ‘get off my plane’ line from Air Force One, although here it is ‘give me back my family’.

At least in Air Force One he was the prez demanding the return of his high tech transportation, I mean everyone has a family…

What I mean to say is that I don’t think anyone puts their heart and soul into Firewall, as predictable and unnecessary film as there has been in the last ten years.

Ford sleepwalks through the role of Jack Stanfield, a tech security expert with all the answers, who becomes the victim of a home invasion, with the assailants (lead by Paul Bettany) demanding he use his skills to wire transfer huge sums of funds into offshore accounts. Or the wife and two kids gets it.

Could that have actually been better?

Unfortunately the criminals – like the film – are incredibly lazy. Instead of watching the family and keeping them in one location they install cameras about the house and let them roam freely as they watch on tiny screens. It’s like Panic Room without the big door and the tension. Why? So the wife and kids can plot and attempt their escape it would seem.

Surely locking them in the garage or games room would be more sensible?

Sure seems that way.

Similarly Jack gets to wander about at his office with only the threat that he is being watched to deter him. Sending an SOS email only proves his email is tapped, but does he never think to pick up a pen and jot down something on a post-it? Nope.

But Jack sure doesn’t.

Odd that Jack is so dopey, given he can overturn a multi million dollar security system with an iPod, do similarly insane things with mobile phones and laptops, and track criminals across the state with a dog collar… (I shit you not.)

If only the film was that smart. It could have taken the snooze inducing build up, converted the many logic deficient moments and utilised the tacked on action ending in order to create something moderately entailing?

Alas the film doesn’t try anything and it is all the poorer for it.

Could that have actually been better? It sure seems that way. But Jack sure doesn’t, and alas the film doesn’t try anything and it is all the poorer for it.

Final Rating – 5.5 / 10. The high tech aspect is meant to class it up. If Jack had been a driver coerced into a robbery. An ex-crim blackmailed back into the game. An expert whose skills are to be used for evil. This would have been a formulaic affair. But he’s a white collar computer guy, which means it is a crappy formulaic affair, but one that got undeserved attention because Han Solo – Indiana Jones was in it.